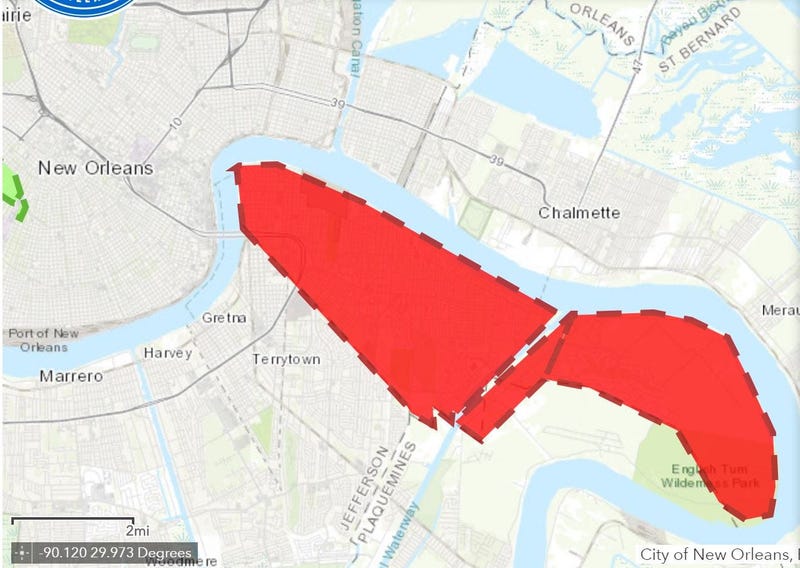 Regarding the West Bank boil water advisory, the advisory includes all of the West Bank of New Orleans, including English Turn and surrounding neighborhoods. pic.twitter.com/7OBisVlQWc

Residents on the West Bank of New Orleans experienced low water pressure Saturday morning as S&WB responded to an apparent water main leak at the intersection of Tullis Drive and Cypress Grove Court before noon.

About an hour later, S&WB officials said they were also responding to a water main break on Zimple Street in Uptown.

Shortly after, an explosion of Turbine 5 inside the Carrolton Water Plant in the 8800 block of S. Claiborne Avenue was reported and later confirmed. Two people received non-life threatening injuries in the incident and were taken to University Medical Center.

Residents in the affected area are advised to use bottled or boiled tap water to drink, cook, clean food or brush teeth until further notice. Residents with compromised immune systems should also use safe water to wash hands, shower or bathe.

SWBNO, in partnership with the Louisiana Department of Health, issues boil water advisories out of an abundance of caution for areas where water pressure drops below 20 pounds per square inch (psi).

Water pressure dropped below 20 psi while crews were performing a test valve closure. The pressure drop is not related to an incident at the Carrollton Water Plant.

Customers in other areas of the city are not affected and do not need to boil their water.

We agree with the recommendations of LDH that it is prudent to issue these advisories out of an abundance of caution. The concern is that a pressure drop inside a water pipe could allow bacteriological contaminants to enter.

Washing hands:  Use soap and tap water, dry hands, then apply hand sanitizer; the safest option is to wash with bottled or boiled water.

Showering or bathing: Be careful not to swallow any water. Infants, young children and disabled persons should be supervised to ensure water is not ingested. Residents with open wounds, chronic illness or weakened immune systems should use boiled or bottled water to bathe until the advisory is lifted.

SWBNO will notify residents when the boil water advisory is canceled. If you have any questions, please call 52-WATER (504.529.2837).

Bring water to a rolling boil in a clean container for a full minute. If the water has a flat taste afterward, shake it in a bottle or pour it from one container to another.