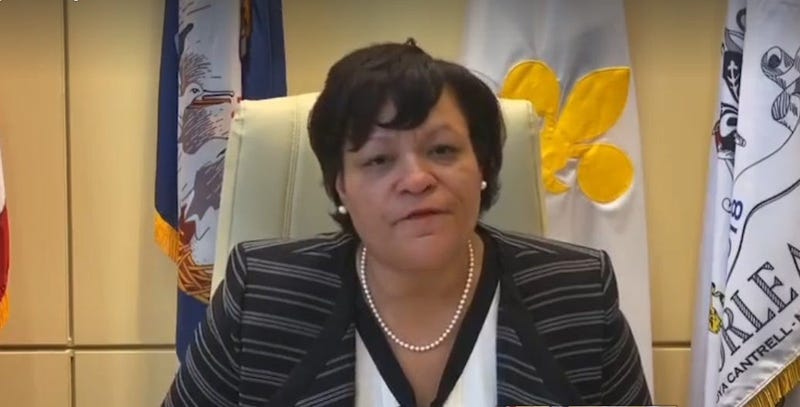 To the people of New Orleans:
We are at a pivotal moment when systematic racism, structural inequality and a global pandemic have converged to challenge us in a way that is unprecedented.
But within this challenge lies an opportunity to reshape our world and build a new and better society that respects and uplifts all people, including the women and men who are the backbone of our cultural economy.
I want to recognize the protestors who have taken to the streets to make their voices heard. I want the men and women who brought their grievances and their anger to my front door to hear me clearly as I have heard them. This moment must redress those who have been marginalized by our tourism economy, by failed policies, and by an economic collapse that has hit the least of us the hardest.
It cannot be about misdirected anger. It cannot be about empty gestures. And it cannot be about storming angrily into a residential neighborhood leaving my daughter feeling terrorized, a 12 year-old black girl, whose mother rose from the epicenter of the crack cocaine epidemic, whose family did not come from a place of privilege. To be worthy of this moment, we have to be bigger than that. We all have to be better than that.
The stated goals and objectives of the workers group that marched into Broadmoor last week should be better aligned with the tactics they chose. Their core demand, for paid sick leave, is an issue that — by state law — must be addressed on the state level, through the legislature. It would be far more effective and also demonstrate a thorough understanding of the issue if they went to Baton Rouge. Instead, they marched into a residential neighborhood to the house of the Mayor, the head of the executive branch of a municipality that does not make state law. They also frightened a child whose only crime was being raised by a woman elected to a position of authority.
That cannot be what this moment is about.
Effective advocacy and meaningful action must be more than angry slogans and empty gestures. The real work is in holding power accountable. That means talking to the business owners and the hospitality leaders about how to take care of their people. I have called for those leaders to create time and a safe space for this badly needed dialogue, followed by action.
The real work must involve talking to state lawmakers about what paid sick leave means — for the health of this City, and for the health of the state’s economy. It means being smart, being bold and building a coalition.
To be an activist in this moment is a sacred and a serious endeavor. To be worthy of it, we must grow beyond the impulse to shout at the nearest authority figure. Determine who can make the changes, determine who is responsible and how they can make things right — and work directly with them to move forward. That’s how Broadmoor was rebuilt. Not by empty dramatics, but by doing the hard work.
Black Lives Matter. My entire lived experience has been a fight to make that point. I did not become the first woman to lead this City by virtue of legacy. Nor was I the first black woman elected Mayor because of any privilege. Every step of my journey — from the crack epidemic that decimated my family, to the years spent on the front lines of the hospitality industry here in this City, to the fight I helped lead to rebuild Broadmoor after Katrina — has been defined by that implicit fact. Black Lives Matter.
My father was a victim of the crack epidemic. My stepfather was another casualty of the same scourge — which ran unchecked by those in power, while it decimated the black community. My brother was system-involved and turned his life around. My stepbrother was system-involved and taken from us by violence at 18. This is not a story about privilege and power. I can stand up and say Black Lives Matter because I’ve personally had to fight to make that true every day of my life.
The hospitality industry, and the workers who are its lifeblood, are the backbone of this city’s economy. If we have any hope of recovery as we stand our City back up, it is pinned on making New Orleans a success story: a safe place for our visitors, and a safe place for the women and men who do the work.