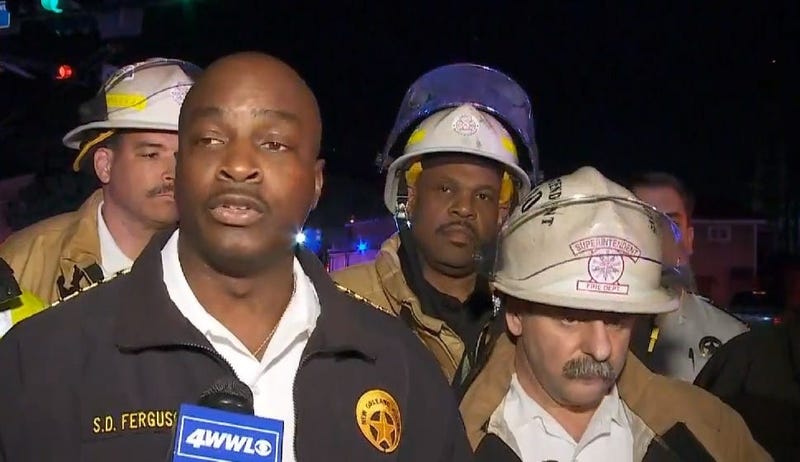 Two people died after a car crashed into a beauty salon and set it on fire.

"The NOPD is investigating a fatal vehicle crash... at the intersection of Washington Avenue and South White Street," NOPD said in a news release.

The incident started when police officers attempted to pull over the vehicle that was reported stolen.

On the scene Mayor LaToya Cantrell said, "One of the fatalities was a woman who was getting her hair done."

Police this morning, however, said the woman was still alive.

"After further investigation into this incident. the number of those confirmed deceased has been changed from three to two. The adult female victim rescued from the building who was earlier reported as having died is, in fact, alive. The victim suffered serious burns in the incident, but has not died," Public Information Officer Aaron Looney said in an email. "Those confirmed dead in this incident stand at two - the two individuals who reportedly inside of the vehicle which crashed into the building."

"At about 8:30 p.m., NOPD Sixth District Task Force officers reported seeing a vehicle traveling south at the intersection of Toledano and South Derbigny streets that matched the description of a vehicle reported stolen in a vehicle theft incident," according to the release. "The vehicle then reportedly made a u-turn at the intersection of South Derbigny Street and South Claiborne Avenue and traveled north. At that time, the officers are believed to have activated their police unit lights and attempted to conduct a traffic stop on the vehicle. The vehicle then reportedly fled on Toledano Street at a high rate of speed, at which time the officers were believed to have deactivated their lights and to not have pursued the vehicle."

The officers reportedly then saw smoke rising in the distance after the fleeing suspects slammed into the building.

Two people in the car were pronounced dead on the scene.

"NOFD crews extracted an adult female from the second story of the building."

Two children and another woman inside the salon suffered injuries.

"Two responding NOPD officers were transported to an area hospital via New Orleans EMS with smoke inhalation injuries and were treated and released. An NOFD firefighter was also treated at the scene for smoke inhalation and was released."

Police say they will conduct an investigation to determine exactly what happened and at what point the officers ended the chase.