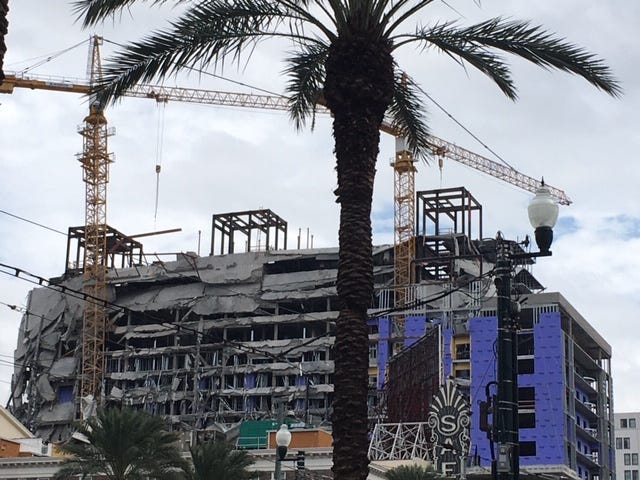 The Thursday afternoon deadline for the owners of the collapsed Hard Rock Hotel structure to file a plan to clear the property has come and passed.

The developer, 1031 Canal Street Properties, was under order by City Attorney Sunni LeBoeuf to compile and deliver the plan to City Hall.

LeBoeuf’s directive stated “an actual demolition plan, as stamped by a licensed engineer”.

The demand for a detailed and engineer-approved plan comes after the developer had turned in incomplete skeletal outlines consisting of ‘vague descriptions of demolition work’.

WWL-TV reports this is another black eye for 1031 Canal Street and comes at, yet again, another inopportune time.

Complicating the issue is DH Griffin and Company, who was chosen to bring down the structure by explosive demolition.

However, when the company could not obtain a $50,000,000 insurance bond to move ahead with the blasting, the company abruptly quit the project and is now in federal court trying to get released from its agreement.

The City of New Orleans is not standing by either.

They have issued a sharp rebuke to 1031 Canal Street stating an “unwillingness to pay for a safe demolition at the Collapse Site is evidenced by the fact that it now purports to seek the City's approval for a fifth demolition plan.”

Ramsey Green, the Deputy Chief Administrative Officer waded into the morass: “If you are abandoning moving on from the most recent plan because of money and money alone, let’s solve that money problem before we move on to a new plan,” Green replied.  “We’re holding pretty firm on ensuring that the folks who built this, who own it, have to pay to take it down.”

Green reiterated the City will not be left holding the bill to tear down the building.