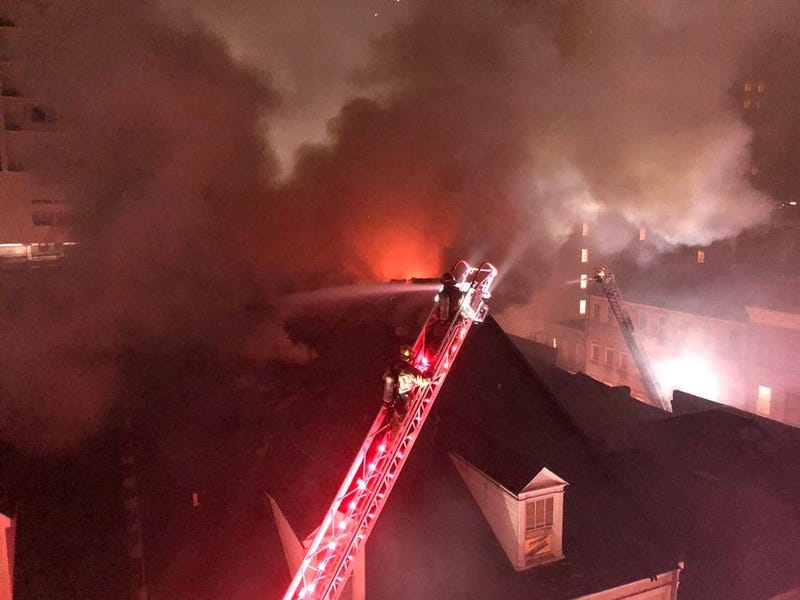 A fire at Quarter House Hotel at Canal and Chartres had New Orleans firefighters calling for backup Thursday night.

One firefighter had to be rescued from a fifth story window after inhaling too much smoke.

Another was also treated after becoming overcome by smoke.

A pair of ladder trucks were used to spray water on the flames and get the fire contained.

Some 80 firefighters helped battle the flames.  It was under control around 2:00am.

The cause of the blaze is under investigation.

Update...The NOFD previously released that “two” firefighters were separated from their crew and became trapped inside yesterday’s six-alarm fire. Although two NOFD members were treated and transported to an area hospital for smoke inhalation, only one firefighter was trapped and rescued during last night’s fire operations.  Both members are expected to make full recoveries. NOFD Fire Operations personnel remain on the scene in the 100 block of Chartres St. conducting overhaul operations and to assist in the investigation.
New Orleans, LA- The New Orleans Fire Department (NOFD) is currently on the scene of a six-alarm fire in the 100 block of Chartres Street.  Dispatched to the corner of Canal Street and Chartres Street as a one alarm fire at 7:49 p.m., the first NOFD companies arrived on the scene at 7:55 p.m., and found a five-story hotel with fire smoke coming from the roof. A second alarm was called for immediately. While making an interior attack the fire started to intensify which prompted a third alarm at 8:19 p.m. and companies being ordered out of the building.  In the process of exiting, two of the firefighters got separated from their crew and trapped in a confined area. Fire crews promptly began a search and assisted members when they made it to a window as they were running out of air.  The two firefighters were transported to a local hospital and treated for smoke inhalation; both were talking and in good condition but will be monitored overnight by hospital staff.  Currently twenty-seven NOFD units carrying over eighty Fire Operations and Support personnel are on scene fighting this fire.
Fire companies will remain on the scene to conduct overhaul and search for smoldering hot spots.  NOFD personnel continue to mitigate this incident. A fire watch has been set in place until further notice.  The Louisiana State Police, New Orleans Homeland Security and Emergency Preparedness, New Orleans Emergency Medical Services, and the New Orleans Police Department all assisted in bringing this incident under control.