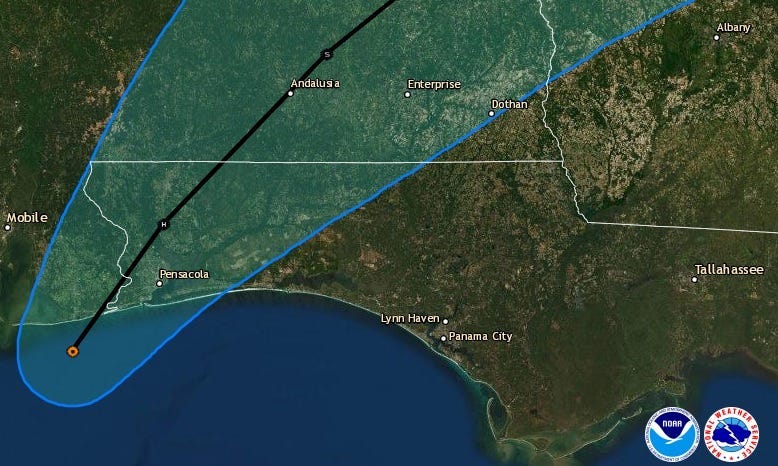 At 4:00am the center of the eye of Hurricane Sally was located south of Gulf Shores, Alabama.  It then moved inland.

"Sally is moving toward the north-northeast near 3 mph," the Hurricane Center advised.

The system got stronger overnight.

Through this afternoon, Sally will produce additional rainfall totals of 8 to 12 inches with localized higher amounts possible along and just inland of the central Gulf Coast from west of Tallahassee, Florida to Mobile Bay, Alabama. Storm totals of 10 to 20 inches to isolated amounts of 35 inches is expected. Historic and catastrophic flooding is unfolding.  In addition, this rainfall will lead to widespread moderate to major river flooding.

Sally is forecast to turn northeastward after making landfall today and move across the Southeast through Friday, producing the following rainfall totals:

Hurricane conditions are spreading onshore within the hurricane warning area in Florida and Alabama.  Tropical storm conditions will continue in portions of the warning areas through tonight.

A few tornadoes may occur today and tonight across portions of the Florida Panhandle, southern Alabama, and southwestern Georgia.

Swells from Sally will continue to affect the coast from the Florida Big Bend westward to southeastern Louisiana during the next couple of days. These swells are likely to cause life-threatening surf and rip current conditions.  Please consult products from your local weather office.