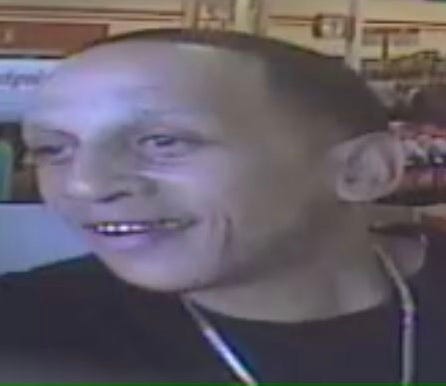 The Jefferson Parish Sheriff's Office is asking for the public's assistance in identifying the suspect in an attempted kidnapping that occurred yesterday in the 11400 block of Jefferson Highway in River Ridge.

Police say just before 4 p.m., deputies were sent to to a store in reference to a juvenile male victim said a male suspect attempted to lure him into a vehicle.  The victim said he was walking in the parking lot of the store when the suspect allegedly pulled up next to him.  The suspect offered the victim candy to get into the vehicle and then threatened to pull a firearm when the victim refused his offer.  The victim returned to the store and told nearby adults of the incident, who notified the police.

Investigators learned the suspect entered the store and made a purchase before contacting the child as he was leaving.  The store's video surveillance system captured a photo they believe is the suspect.

The suspect may have gold upper teeth.

Anyone with information on the identity of this suspect is asked to call our Investigations Bureau at 504-364-5300 or contact Crimestoppers.