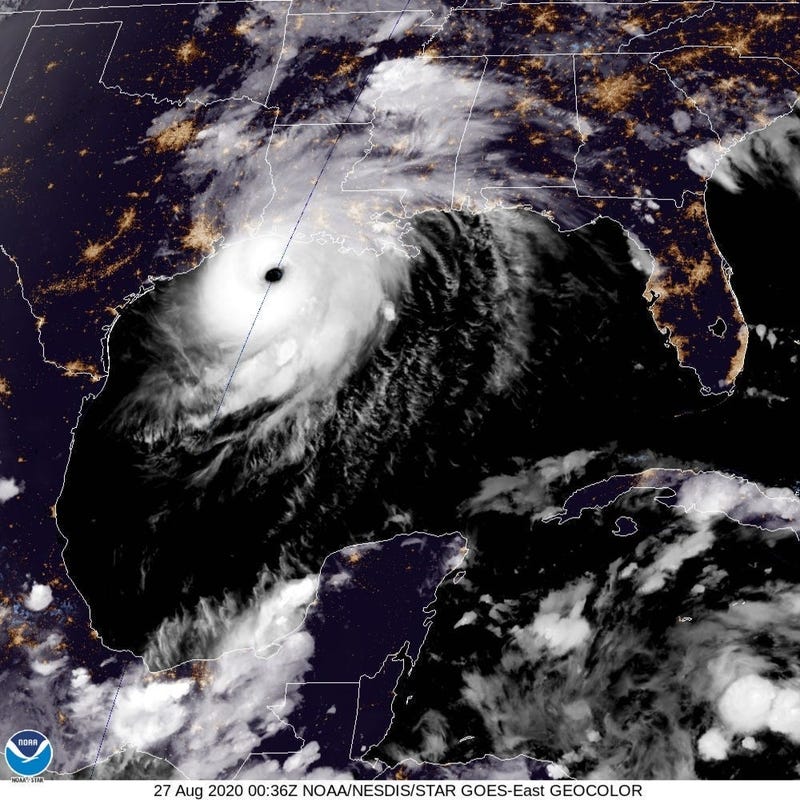 That is near the top of the category 4 level, with category 5 starting at 157.  Forecasters say Laura could get there.

"Reports from a NOAA Hurricane Hunter aircraft indicate that the maximum sustained winds have increased to near 150 mph,"  the Hurricane Center advised. "Some additional strengthening is possible tonight before Laura reaches the northwest Gulf coast overnight."

Laura is starting to run out of time.

"On the forecast track, Laura will approach the upper Texas and southwest Louisiana coasts this evening and move inland within that area tonight.  The center of Laura is forecast to move over northwestern Louisiana tomorrow, across Arkansas Thursday night, and over the mid-Mississippi Valley on Friday."

The Hurricane Center says people must get out of Laura's path and forecast 20 foot storm surge.

"Storm surge and tropical-storm-force winds will arrive within the warning areas well in advance of Laura's center.  All preparations to protect life and property should be rushed to completion in the next few hours."

The deepest water will occur along the immediate coast near and to the right of the landfall location, where the surge will be accompanied by large and destructive waves.

Unsurvivable storm surge with large and destructive waves will cause catastrophic damage from Sea Rim State Park, Texas, to Intracoastal City, Louisiana, including Calcasieu and Sabine Lakes. This surge could penetrate up to 40 miles inland from the immediate coastline, and flood waters will not fully recede for several days after the storm.

Surge-related flooding depends on the relative timing of the surge and the tidal cycle, and can vary greatly over short distances. 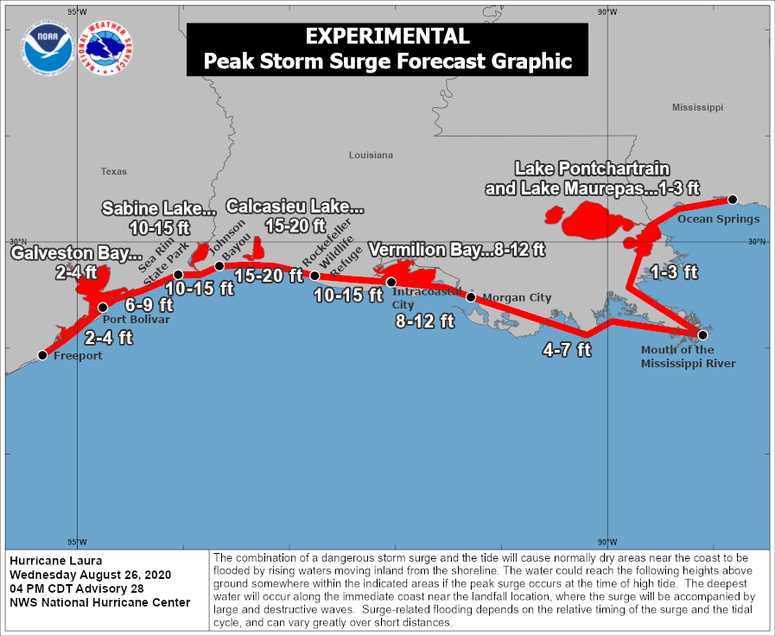 From this evening through Friday, Laura is expected to produce the following rainfall totals:

This rainfall will cause widespread flash and urban flooding, small streams and creeks to overflow their banks, and minor to moderate freshwater river flooding.

By Friday into Saturday, Laura is expected to produce the following rainfall totals:

Across the mid-Mississippi and portions of the Tennessee Valley, Lower Ohio Valley, and central Appalachians: 2 to 4 inches with isolated maximum amounts of 6 inches. This rainfall may lead to flash and urban flooding and rapid rises on small streams.Across the Mid-Atlantic Region: 1 to 3 inches.

Swells produced by Laura are affecting the U.S. Gulf coast from the west coast of Florida to Texas and northeastern Mexico. These swells are likely to cause life-threatening surf and rip current conditions.  Please consult products from your local weather office.