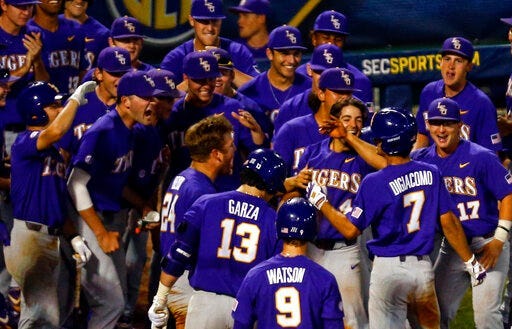 Doubters were aplenty this season for LSU baseball when the calendar turned to March.  The Tigers were ranked No. 1 in preseason publications to start the season.  Then in March, Texas swept LSU in Austin.  In April, the Tigers lost two of three games to Missouri, who didn’t even make the NCAA baseball tournament, along with Texas.  The pitching staff was beset with injuries.  The overwhelming narrative was It just wasn't going to happen for the Tigers.  LSU fans and media members (present company excluded) were ready to read the Tigers their last rights, prepare the eulogy.

The Tigers then went on to win the next two SEC series over Florida and Alabama, but fans still panned the team.  "They are supposed to beat teams like that," was the puffed up cry from many.

LSU's season turned on May 11th in Fayetville, Arkansas.  The Tigers were facing another road series sweep at the hands of the Razorbacks.  Down 2-0 in the bottom of the 8th, the Tigers looked like a team resigned to their fate.  Then, the world changed.  Senior outfielder Antoine Duplantis smacked a three run homer to give LSU the 3-2 victory, avoiding a dreaded 0 for 3 series.  After that, LSU took two of three games from Auburn to close out the regular season. Then Paul Mainieri's squad turned in three wins in the SEC baseball tournament.  Since May 14th, the Tigers have gone 9 and 3, looking more like the team many expected before the crack of one bat.

The confidence and character of Paul Mainieri’s team never wavered.  Externally things appeared to be imploding after a rough March and April.  Internally the Tigers kept the faith and kept plugging away.  I've covered LSU baseball for nearly eight seasons, and one thing I've learned, it’s a grave mistake to draw conclusions in March, April and even early May.

Right now this LSU baseball team is as dangerous as any in the country.  With Cole Henry returning to form on the mound, a grown up freshman Landon Marceaux, and the steady Erik Walker; the once diminished starting pitching rotation looks more than capable.  The bullpen is armed with power arms like Zack Hess, Devin Fontenot, and Todd Peterson.  It’s a recipe for a run to Omaha.

LSU’s once top heavy lineup looks balanced and explosive. Catcher Saul Garza has 40 hits since May 16th,  Brandt Broussard is on fire at the plate. This kind of run shouldn't surprise you, if you follow LSU baseball regularly.  This is how they typically perform.  When the muggy south Louisiana heat cranks up, the Tigers turn up the heat on the rest of college baseball.

If you were an LSU baseball skeptic, I don't blame you.  Heck, at times I had to talk myself off the ledge.  However, now is a time to really get behind this team.  We might be witnessing one of the more intriguing runs to Omaha in the history of this storied program.

Before you call me crazy just take a look at the Athens regional.  No. 4 national seed Georgia is facing elimination after the Florida State Seminoles sent the Bulldogs to the losers bracket beating them 12-3.  If the Bulldogs don't win their regional and LSU continues to take care of business, the Tigers will host a Super Regional next weekend in Baton Rouge!  Who woulda thunk it?  Me.  But, I won't brag!