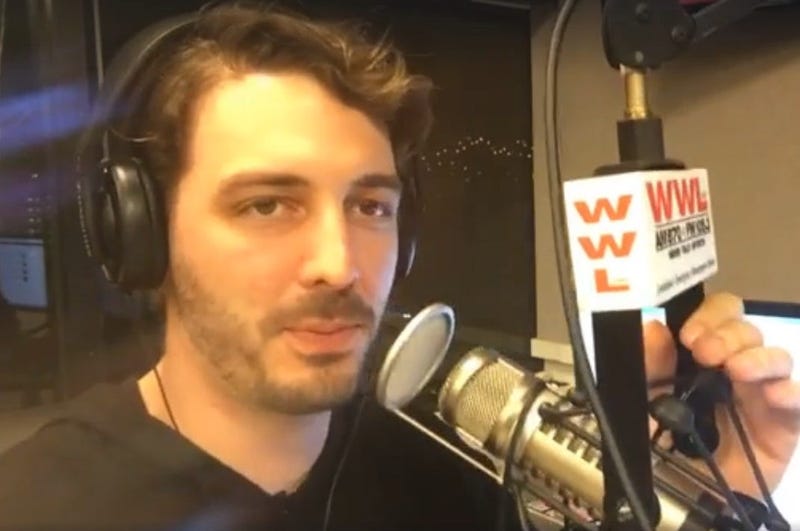 New Orleans police have opened a probe into a claim from the management at WWL Radio and its parent company, that radio host Seth Dunlap used the station's official Twitter account to post an offensive tweet and then extorted the station for $1.85 million.

The complaint that WWL and Entercom filed with NOPD says that a digital forensic expert concluded that the tweeted slur directed at the openly gay host came from Dunlap's own phone.

"The investigation discovered that the tweet was sent from an IP address associated with Mr. Dunlap's personal cell phone," according to the police report.

The report outlines that Dunlap was seen on video surveillance walking into his office and closing the door at the time the post was made, and then walking out of his office with his phone in his hand just after the tweet went out.

Attorney Michael Banks also claimed that while later meeting with station officials, Dunlap asked how much the company would pay and threatened to publicly attack the station through a "scorched earth" campaign.

The report says that WWL refused to pay any money.

Dunlap's attorney sent a letter calling on WWL to pay $1.85 million after the meeting.

Dunlap, meanwhile, denies he sent the tweet and alleges mistreatment.

In a public release, she said, "We will reveal the appalling history of discrimination Seth has experienced during his eight years at Entercom as an openly gay man."

Kiefer alleged that Entercom has allowed an anti-gay, bigoted, and hostile work environment to flourish.

"Entercom as well as its corporate lawyers were aware of instances of homophobia and discrimination and did nothing to protect Seth or its LGBTQ+ employees."

She said she would be preparing a lawsuit and complaint to discuss this in more detail.

Kiefer told the Times Picayune The New Orleans Advocate that WWL's complaint is "littered with falsehoods."

In a statement, WWL and Entercom insisted, "We strive to be inclusive at all levels as a steward of the community and a good corporate citizen. We remain committed to supporting all members of the LGBTQ+ community."

"Seth voluntarily submitted to a polygraph test administered by a certified and licensed expert polygraph examiner.  The results of the testing, which have a 95% accuracy rate, concluded that Seth was truthful during the polygraph testing, and completely exonerated Seth from any involvement in the offense tweet whatsoever," Kiefer and Kiefer said on the firm's website.

In the police report, WWL outlines how Dunlap is allegedly in financial trouble, faced with collection efforts and wage garnishment requests for "a variety of unpaid credit cards and personal loans."

If charged with and convicted of extortion, Dunlap could face 15 years in prison.

It's not clear how long the NOPD investigation will take.