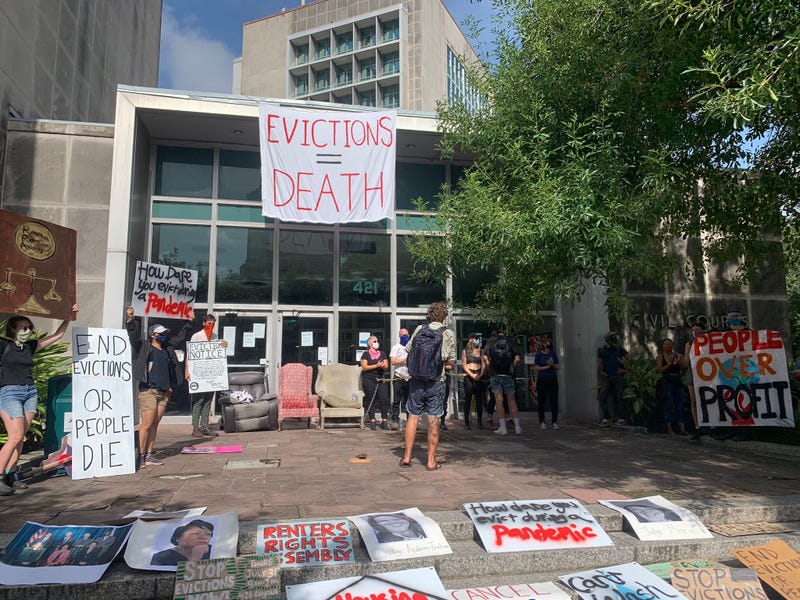 The COVID-19 pandemic has left many people unemployed and many residents in New Orleans and across Louisiana now face possible evictions, after a moratorium on evictions expired last month; and eviction proceedings have resumed.

On Thursday, several protesters attempted to stop eviction proceedings by blocking the court’s entrance for five hours and telling anyone who approached that the “court is closed."

"The people that are being impacted most are taking it upon themselves to stop evictions from happening," one protester told WWL-TV.

A couple people climbed on top of the building to put up this sign pic.twitter.com/Tjg4IiaXBB

The protest also affected other court proceedings not related to evictions. Court spokesperson Walt Pierce said in a statement:

"All of the Judges, attorneys, litigants, witnesses and visitors seeking entry to the courthouse were affected in one way or another by the activities outside of the courthouse - not just the parties to eviction proceedings. Judges are rescheduling cases where needed for that very reason."

So far, over 300 evictions have been filed in court. Evictions for federally funded housing can once again resume as well.  Property owners must give tenants 30-day notice of eviction.  More evictions are expected by late August.