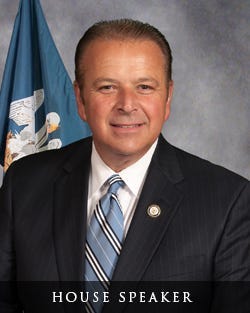 (WWL.com) - Louisiana Speaker of the House Taylor Barras, for a third month in a row, has blocked the Revenue Estimating Committee from recognizing additional revenue for the state budget from an improving economy. Commissioner of Administration Jay Dardenne says the delay will prevent State Police from recruiting the next class of officers.

The three member REC requires unanimous consent to adopt a revenue forecast that is used to create the state budget.

And he expressed concern that the decision would exacerbate a budding public health epidemic that is crippling small Louisiana towns.

“We are not going to be in a position as a state where we can appoint fiscal administrators for these small communities in Louisiana who are having water system problems.”

Governor Edwards is anticipating the revenue increase, and says he plans to use it to fund a teacher pay raise.

But Barras says the state does not know enough about the upcoming year’s state economy to make an accurate projection yet, and last year is a good example of how unpredictable that process can be. He says the state was projected to face a budget deficit last year that ultimately was overstated.

“We kept .45 of the sales tax penny, we ended that session in June, and three weeks later we had a 300 million dollar surplus that this conference did not predict, or adopt.”