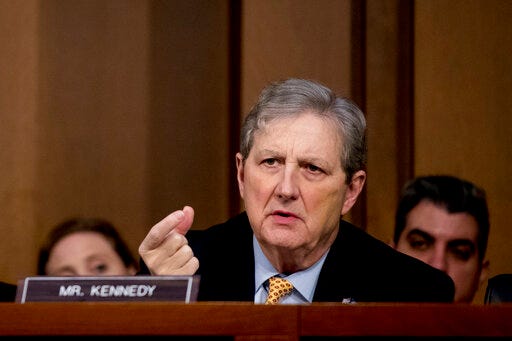 12 US Senate Republicans voted against the President’s national emergency declaration that would allow him to access billions in construction dollars to build additional physical border wall. Senator John Kennedy was not among the 12, and says history shows the President’s move is quite legal.

“I’ve looked at 61 past instances, and my conclusion is that any fair minded person who knows a law book from an L.L. Bean catalog understands that the President has this power.”

The 12 Republican Senators voiced concerns about executive overreach, and the potential for the declaration to be a template for future Democratic presidents. Kennedy says he sympathizes with that concern.

“Some of my colleagues believe that the national emergencies act and the statues supporting it are too broad and violate the constitution, and that past Congresses made a mistake.”

Most of the Republicans who voted against the declaration, like Marco Rubio, Susan Collins, and newly elected Mitt Romney, are considered to be from the more moderate wing of the party.

The Senator says he shares his colleagues concern about the power of the executive branch, but says that’s not what this vote was supposed to be about. Kennedy predicts this incident will inspire an effort to prevent future similar uses of national emergencies.

“I think you very shortly will see a bill introduced, and go through regular order in the United States Senate, to reform the National Emergencies Act.”

The President says he will veto the Congressional action, and it appears highly likely that vetoed will be sustained, as Congress would need a 2/3rds vote to overturn it.