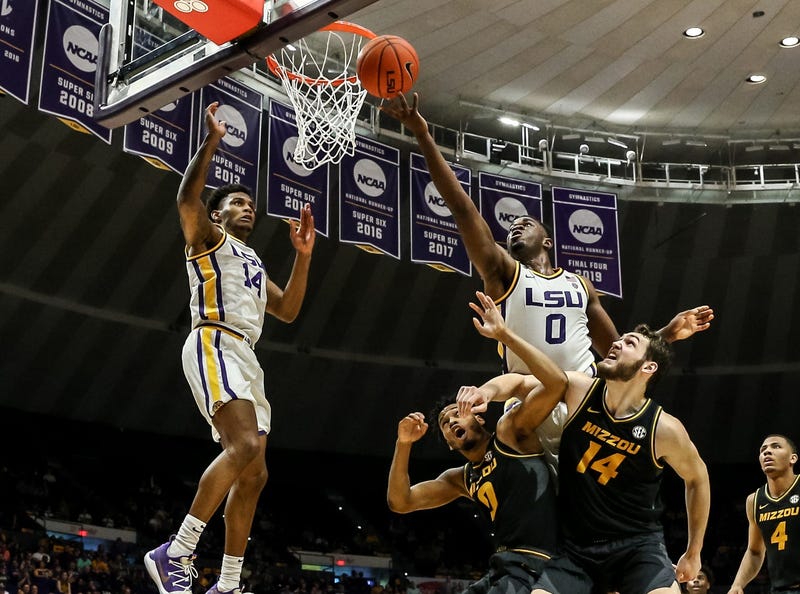 You can write a scouting report how to stop LSU on a wallet-sized index card.

Don’t let the Tigers drive offensively to the basket from start to finish. And don’t send them on a game-long march to the free throw line. Keep them off the offensive boards.

“That’s what we do, look at our stats for the three years we’ve been here,” LSU third-year coach Will Wade said.

When all else fails, attack the rack and ye shall mount a comeback, no matter how much you sleepwalk through the first half, as No. 25 LSU did in Tuesday night’s 82-78 victory over Missouri in the Pete Maravich Assembly Center.

Losing by as much as 12 points in the first half and by six at halftime, LSU finally shook the fatigue hangover from Saturday’s overtime loss at then-No. 11 Auburn. After leading just once at 2-1 and trailing for almost 33 minutes, LSU caught and passed Missouri at 72-69 on a Darius Days 3-pointer with 4:44 left.

Days, a 6-6 sophomore forward who has come to life the last two games after struggling mightily with foul problems, scored seven of LSU’s last 13 points and collected two offensive rebounds in that stretch that his team converted into points.

The second of those offensive boards came with 28 seconds left and LSU clinging to a 3-point lead. Missouri’s Mitchell Smith blocked a drive by LSU’s Trendon Watford. Days dug the ball out of a baseline scrum and somehow hit about an 10-foot jump hook with 25 seconds left for a 78-73 LSU lead.

“That was more than a prayer than anything,” said Days, who finished with 20 points (including 9-of-9 free throws) and 10 rebounds (five offensive, five defensive). “It went in, though. . .we gained momentum, ran with it and won the game.”

Also for LSU, forwards Watford and Emmitt Williams added 11 each. But it was guard Javonte Smart who got the home team positioned for Mays to take over in the final five minutes.

Smart took his game up a notch, driving and shooting a pull-up jumper as well as a floater and a step-back 3. This was accomplished much to the chagrin and admiration of Missouri coach Cuonzo Martin, who watched LSU hit 29-of-34 free throws compared to Mizzou’s 7-of-13.

“They’re the only team where you have five guys who can make plays off the dribble,” Martin said. “When that happens, you are steadily driving the ball. They’re one of the few teams that if the three-ball is not falling or not, it doesn’t matter because they can get to the free throw line. They can make up for it by getting to the rim and getting offensive rebounds.”

LSU trailed 43-37 at the half and did well to fight back to a single-digit deficit.

Wade’s team looked dead on arrival from the opening tip. Perhaps if LSU wanted to use lack of energy as an excuse since it was coming off an overtime loss at Auburn Saturday, it wasn’t valid since Missouri also went into overtime Saturday in a win over Arkansas.

Missouri (11-13, 3-8) played with the desperate energy of a team that entered Wednesday’s game tied for 11th in the SEC but having won two of their last four league games.

Mizzou entered the night averaging 7 made 3s per game. It got that many in the first half, hitting 7-of-13 and outscoring LSU 21-0 since the home team went 0-for-7 from long distance.

LSU had given up 30 3’s combined in the Vanderbilt and Auburn losses, so naturally closing out defensively on the outside bombing has been a point of emphasis in practice.

But apparently, the Tigers are forgetting to do one thing.

“We just stand there with our hands up but we don’t contest the shot,” Wade said. “It’s crazy. They hit seven 3’s the first half and five of them we were there. We didn’t jump to contest them.”

Missouri made just two 3s in the second half to finish 9-of-21. But Mizzou held LSU at bay for a good portion of the final 20 minutes, thanks to guard Dru Smith’s team-high 20 points coming off his slithering drives.

Not much LSU tried in the first half worked as Missouri led 43-37 at the break.

LSU attempted to jump-start a transition game with its full-court press hoping to create turnovers. Mizzou scored at least 10 points with layups and dunks off LSU’s press with quick, sharp passes that broke down the back end.

Missouri also played excellent defense. It was smart enough to double Watford almost every time he touched the ball, keeping the physical freshman from playing to his strength of driving to basket with either hand.

LSU immediately looked like a different team at the start of the second half. It played with life, showing the relentless energy that had made it one of the SEC’s best rebounding teams.

“The game kind of went to our formula and got the stops and got done what we needed to get done,” Wade said. “At the end of the day, it was a rough week and we needed to find a way to win. I understand we need to play better, but the goal was to win and we won. Now we’ve got to get better to go back on the road and play better on the road.”

With LSU’s schedule backloaded with road games, it can’t afford to lose at home. The Tigers’ next three of four games are away from the PMAC, the lone home contest next Tuesday against Kentucky.

Click here for the latest LSU basketball news from TigerRag.com