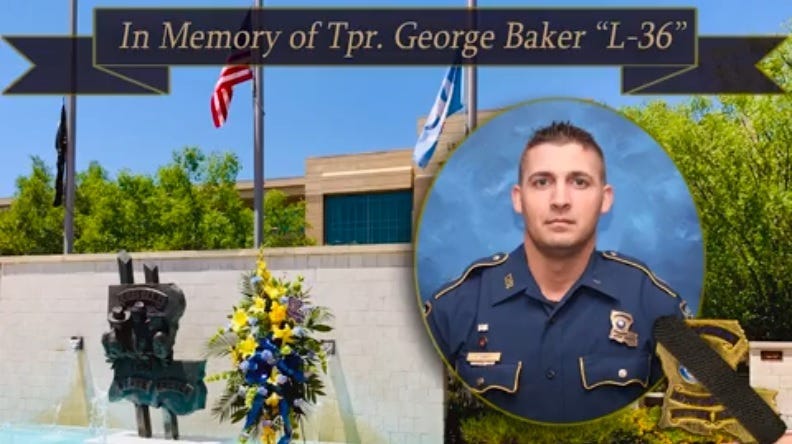 Trooper George Baker was hit by a Hammond police officer as he and and another trooper were picking up a spike strip used to flatten the tires of a fleeing vehicle during a chase.

"My heart is heavy at the passing of Trooper Baker, who served the people of our state with honor and dedication and died from injuries sustained in the line of duty," Edwards said in a statement. "His selfless commitment to his fellow Louisianans represents the best of us and he continues to serve even after his passing by having his organs donated to help others in need. His courage and bravery will never be forgotten."

The governor asked the public to join him and the first lady in praying for Trooper Baker, his wife Heather, daughter Harper, family, friends and countless others as they mourn this great loss.

"Our thoughts are also with all members of Louisiana State Police, who have lost a true teammate and brother today.”

Hammond – Today, the Louisiana State Police is deeply saddened to inform the public Trooper George Baker has succumbed to injuries sustained in the performance of his duties. Trooper Baker sustained severe injuries during the early morning hours of Wednesday, May 20, as he joined with other Troopers assisting the Hammond Police Department with a vehicle pursuit. Baker was a 33-year-old, 10-year law enforcement and military veteran. A vigil of family, friends, and his fellow Troopers remained at the hospital from the very beginning until his passing. Trooper Baker is survived by his wife Heather, their young daughter Harper, his parents, his sisters, and his extended family. Trooper Baker served as a Trooper at Louisiana State Police Troop L since November of 2017 and is the first LSP line of duty death since Senior Trooper Steven Vincent, Troop D, in August of 2015. Troop L has not lost a Trooper in the line of duty since the passing of Trooper Rudolph H. Miller on September 8th, 1962. Trooper Baker is the 30th Trooper to lose his life in the line of duty in the history of the Louisiana State Police.

Trooper Baker had a lifelong desire of becoming a Louisiana State Trooper. In preparation for that goal, he spent 8 years in the United States Marine Corps Reserve including one combat deployment in the Middle East. He began his law enforcement career with the Greensburg Police Department, where he worked for 4 years. He then served the St. Helena Parish Sheriff’s Office for 3 years before joining the Louisiana State Police.

In a statement to Troopers, State Police Superintendent, Colonel Kevin Reeves said, “Trooper Baker passed today leaving our hearts heavy but full of pride as he exemplified our values of duty, selfless service, and personal courage.” Even after his death, Trooper Baker continues to show his commitment to community and selfless service by donating his organs so that others may live. Arrangements are incomplete at this time, but Trooper Baker will be afforded full honors earned with a line of duty death.

For information on providing assistance to the Baker family during this tragic time, please visit www.latroopers.org and direct donations to the Louisiana Troopers Charities – Trooper Baker.