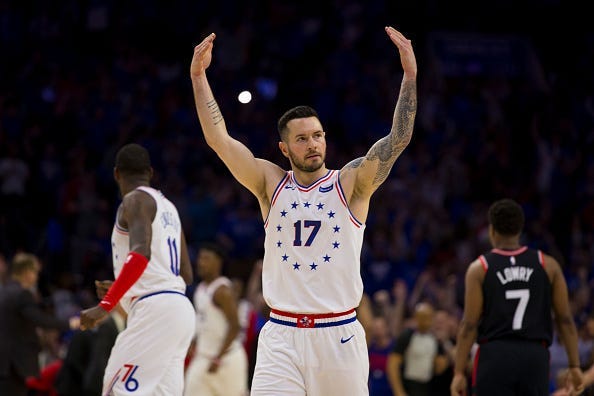 “From the time that I started with the Pelicans and met with Alvin Gentry for the first time, we had a very keen awareness that the ideal player for us was someone like J.J. Redick,” Griffin said. “We never really dreamed that we would be able to land the J.J. Redick. So this was an exciting thing for us.”

And Redick had the same reaction when he heard the Pelicans were interested in signing him.

“Take away any sort of number on a contract, I was immediately excited,” Redick said. “I thought with getting Zion (Williamson), knowing that they would be making a trade and with having Jrue Holiday there... I felt like it twas a team with a lot of momentum.”

Redick told reporters that Jrue Holiday is a player he’s wanted to play with for a long time and that after watching the NBA’s top overall pick, Williamson, at his alma mater, he thinks he’ll be playing along side a generational talent.

“Watching him, I thought they need more shooting around him,” Redick said of watching Williamson at Duke. “I didn’t think, at the time, that it would be me.

“But I think he’s one of those players that can make such a huge impact on both sides of the basketball and can dominate a game without taking 20 shots.”

Redick is now focused on keeping that offseason momentum going by helping this young Pelicans team make a run at the playoffs.

Coming off of back-to-back seasons where he averaged career-highs in scoring with 17.1 and 18.1 points per game, respectively, the Pelicans will look for Redick to provide offense as well as leadership in a young locker room filled with several former Blue Devils. Williamson, Brandon Ingram, Frank Jackson and Jhalil Okafor are all former Duke players.

Griffin said he thinks Redick will have no problem blending becoming a leader in that locker room as he’s seen him do just that since he was in high school. Griffin said he recalled watching Redick at 2002 McDonald’s All-American game practice demonstrate his leadership qualities going through a shooting routine.

“(Former NBA All-Star) Amar’e Stoudemire walked in and sort of surveyed the situation and he watched what JJ was doing and immediately gravitated towards JJ because it was very clear JJ had routine and that spoke to Amar’e,” Griffin recalled. “Amar’e is somebody who I came to know very well once we drafted him. And he was drawn to the fact that, even then, JJ was a true pro.”