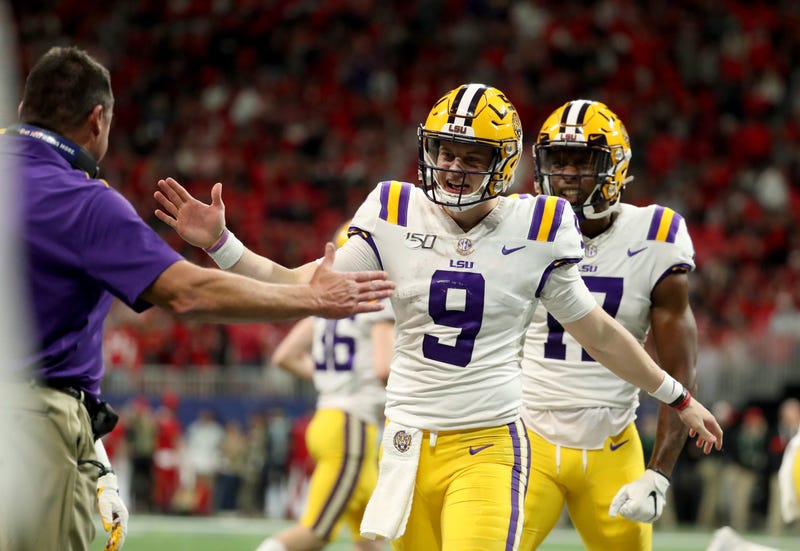 Joe Burrow has a chance to become the second LSU player ever to win the Heisman Trophy, when college football’s top award is announced Saturday night at 7 p.m. on ESPN.

Earlier this week, he got to meet the family of the program’s only winner, Billy Cannon.

Burrow also received a letter from relatives of the late LSU great as he departed for the Heisman Trophy awards ceremony New York.

Joe Burrow told reporters Friday that Cannon’s family said the 1959 Heisman winner would have been proud of him.  The senior said it meant a lot that they would take the time to contact him.

He also said he’s thought about what he’ll say if he wins the award, although LSU fans will have to wait and see what that is.

Burrow has been on somewhat of an award tour this week as he’s attended ceremonies for the Unitas Award in Baltimore and he was also in Atlanta, where he won the Davey O’Brien and Maxwell awards.

“It’s been a long week,” Burrow told reporters including FOX 8’s team who live streamed his media availablity.  “It’s such a blessing.  I met a lot of great people along the way and everyone has been so kind and it’s just a blessing.”

Burrow, the SEC Offensive Player of the Year, has re-written the LSU record books this season, establishing school marks for passing yards (4,715), passing TDs (48), passing yards per game (362.7), completions (342), total offense (5,004) and total offense per game (384.9).  He also broke the SEC record for passing yards and passing touchdowns in a single season, and is on pace to set the NCAA single-season record for completion percentage as he connected on 77.9 percent of this attempts, while leading the Tigers to a 13-0 record and the top-seed in the College Football Playoff.

Burrow was asked what he planned to do with all his new trophies and the one he potentially could bring home Saturday night.

“We’ll have to make something at my house in Athens (Ohio),” he joked. “I have all my high school trophies in my basement; I might have to extend the wall a little bit.”