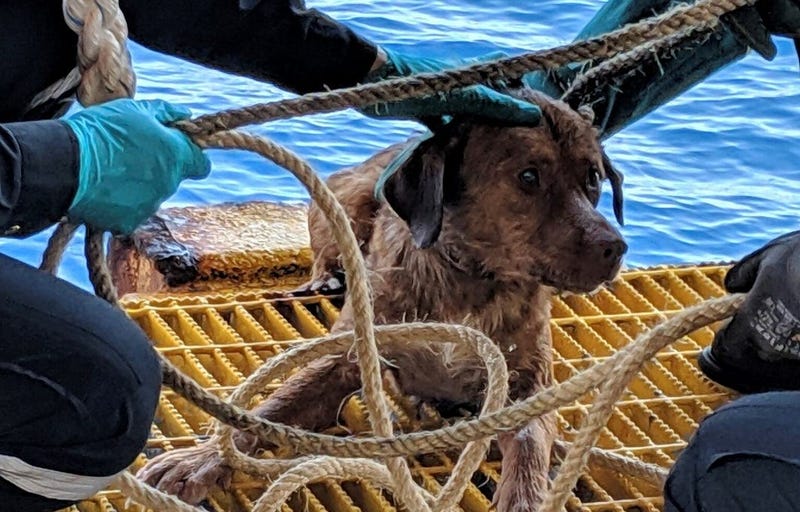 The crew on an oil rig 135 miles from land pulled a dog to safety after spotting the pup in the water.

Unless the dog jumped off a boat or was on a vessel that went down, it would appear this canine swam all the way to the rig from the land.  That's one hellova swim.

So, I wanted some help in finding a proper name for the pup.

I put the question to our audience during the Early Edition of WWL First News.  Lucky got the most votes, but some of the other names texted to 870870 were really creative.  Bob (get it bobbing up and down) was among my favorites.  Wilson (the volleyball from Cast Away) was another great one.  Then there was Gilligan.

Here is the story that started the coversation:

DOG FOUND FAR OFF SHORE RETURNED TO LAND   BANGKOK (AP) _ Think you have a dog that likes to swim? Your pooch has nothing on a dog that turned up more than 135 miles from shore _ near an oil rig in the Gulf of Thailand. A worker on the rig posts on Facebook that his crew spotted the dog heading toward the oil platform last week. Workers lowered a rope, secured it around the dog's neck and hauled it aboard. It's since been taken to shore and is now in good shape. The crewmember who posted about the rescue says the seas were calm when the dog showed up near the rig. He says if the waves had been choppier, the crew probably wouldn't have been able to spot the dog.