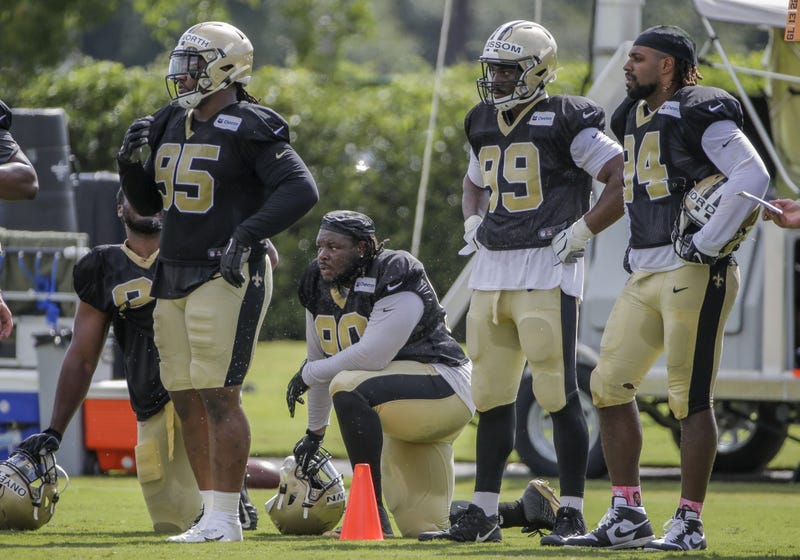 Saints defensive tackle Sheldon Rankins tore his Achilles on January 13th in the NFL Divisional Round win over the Philadelphia Eagles.  Rankins started training camp on the PUP list, and likely will miss a few games this season while he rehabs the injury.  Fellow defensive tackle David Onyemata is facing a one game suspension for an off the field run in with law enforcement.   The Saints also lost nose tackle Tyeler Davison in free agency.  That would seem like devastating blows to a defense that was really finding its way. But then, good things happened for the Black & Gold D-line.New Orleans added defensive tackle Malcolm Brown, and defensive end Mario Edwards in free agency.  “I’ve known Mario Edwards since very early in his career. When the Saints signed (Mario) Edwards I was not excited,” admitted the “Voice of the Saints,” Zach Strief.  His play during Saints Training Camp has changed the 12-year Saints offensive lineman’s mind.  “He’s been difficult to block in passing situations,” Strief pointed out.  So what happened? How can a guy all of a sudden just turn into a high performing player? “He’s in a good system,” explained Strief.“He’s got a coach in Ryan Nielsen that is drawing stuff out of him that maybe other teams haven’t.  Also, for the first time in his career he’s with a winning team,” said Strief.  The Saints defensive line depth isn’t just because of the sudden emergence of Mario Edwards.  Defensive tackle Malcom Brown has been solid in camp.  Veteran Sylvester Williams has also been impressive. All of a sudden when Rankins returns from injury the defensive line group is really crowded.Strief goes back to Mario Edwards and what you might see out of him in the regular season.  “He looks great. He’s just a limited rep guy.  Maybe 20 snaps per game is what he can give you,”  observed Strief. That’s not how Edwards was used early in his career, but by playing to his strengths now he’s becoming a more effective player.One player I haven’t mentioned yet is last year’s surprise, defensive tackle Taylor Stallworth.  “He’s in the mix for sure.  He had a player the other day on a counter play...he was so quick, and penetrated the backfield in a hurry,” Saints color analyst Duece McAllister observed. The bottom line...what we thought might be a thin position group is shaping up to be really talented, loaded with depth and functioning at a much higher level.  As both Zach and Deuce said today... another good problem for the Saints to have.