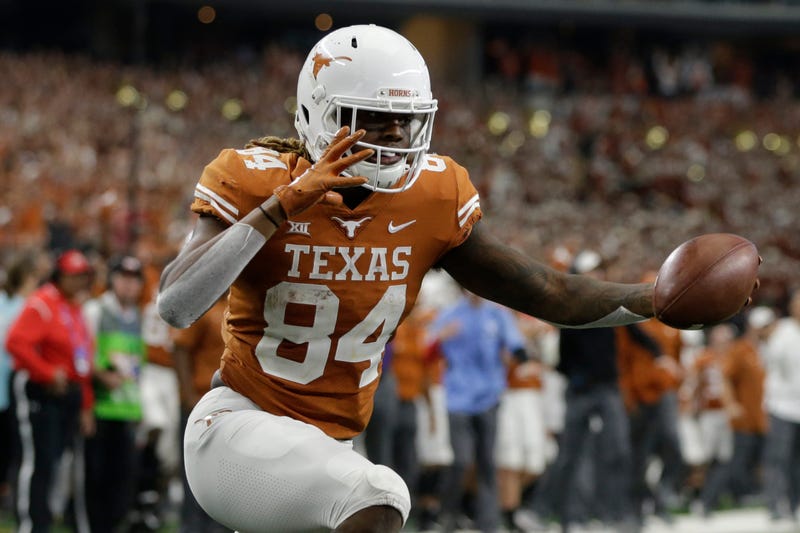 Every year, there is typically one long shot or dark horse that makes an impression and lands on the Saints roster. Last year, it was defensive back J.T Gray, and undrafted rookie free agent out of Mississippi State.

However a dark horse isn’t just an undrafted rookie free agent but could also be a career journeyman that might be on his way out of the NFL looking for one last chance.

Who’s it going to be this year? Here is a list of candidates to think about.

WR Simmie Cobbs: He was scooped up last year by the Saints and put on the practice squad. Cobbs has been impressive in OTA’s and Mini Camp practices, making tough catches look routine at times. He’s a strong candidate at a position of need for the black and gold.

DE Corbin Kaufusi: He’s 6-foot-9 with fantastic length and you can never have enough pass rushers. The rookie out of BYU will be a fun guy to watch. He’s got some pass rush ability that could land him a spot on the team.

RB Devine Ozigbo: The Saints do not have a lot of depth behind Latavius Murray and Alvin Kamara. Ozigbo’s skill set matches up with the Saints offense very well. If he can make a couple of plays on special teams he’ll put himself in a nice position to make the roster.

DT Shy Tuttle: Was highly productive at Tennessee. The Saints made an effort to get a little heavier this year on the defensive line. Tuttle fits that bill checking in at 300 pounds. Sheldon Rankins will miss some time at the start of the season rehabbing from a torn Achilles and David Onyemata is suspended for the first game, thus creating some depth concerns in the interior of the defensive line.

DT Sylvester Williams: Isn’t by true definition a dark horse but in this case he still has long odds to make the roster. His veteran presence gives him a chance to stick at a thin position group heading into the regular season. Spoiler Alert! Williams is my pick as a dark horse. The problem is if a younger player like Shy Tuttle plays just as well as Williams, Tuttle will get the nod. He’ll be cheaper and isn’t a vested veteran, it’s complicated the CBA would come into play here. In other words if Williams is on the roster through week 1, the Saints would be on the hook for his salary for the rest of the season. Tuttle could be bounced on and off the roster as need be without a heavy price.

DB Terrell Williams Jr.: He’s huge for a defensive back at 6-foot-4, 212 pounds. The issue is the Saints secondary might be the deepest position group on the entire roster. Williams Jr. will have to find a way on the roster in the kicking game on special teams.

WR Lil’Jordan Humphrey: Is massive at 6-foot-4, 225 pounds. At Texas, he was extremely physical, running over defenders when the football was in his hand. He doesn’t have good top end speed. During OTA’s and mini-camp practices Humphrey struggled to get separation from defensive backs. When the pads are on that might change, but I doubt it. However, the Saints tend to favor big receivers so we’ll see.

See the list of our sports team’s Dark Horse picks:

Bobby Hebert: “WR Cyril Grayson, Jr.: The former LSU track star looks like he played football with the Tigers. He’s been impressive with tremendous speed, and route running. If he can run a couple of kicks back during the preseason he’ll make this team.”

Per Typical Cajun Cannon he won’t give us just one dark horse he likes another player on the roster. Ok Bobby. Who’s your other dark horse?

Bobby Hebert 2.0: “RB Devine Ozigbo, I could see him making a few plays in the pre-season. I want to see him in pads though. I don’t know how physical he is yet. But he’s elusive and smooth. I know that”

Deuce McAllister: “WR Emmanuel Butler. I love his size and awareness. He looks smooth at the top of his routes and has really soft hands. If he can prove that he can block on the edge in the running game, that will give him a chance to catch on with the Saints.”

Zach Strief: “WR Rashard Matthews is making the team. Nobody has said anything about that guy. He’s not a rookie but he would be considered a long shot to make the team. He’s my guy.”

Mike Detillier: “CB Kayvon Webster. He has started for the Broncos, Rams, and Texans when he’s been healthy. The problem is he never stays healthy. If he avoids injury he’ll make this team. They are looking for some depth at the corner position. I like his versatility to play in the base, nickel, and dime packages.”

Steve Geller: “LB Porter Gustin. He was a productive pass rusher at USC but had his junior and senior seasons cut short due to injuries and that’s why he ended up not being drafted.  Like the Cajun Cannon loves to say though, Gustin is hell when he's well. The 6-foot-5, 260-pound edge rusher tallied seven sacks in just six games last season with a fumble recovery. He seems to know only one speed and that is full throttle.”

Seth Dunlap: “WR Lil’Jordan Humphrey. I think there is a chance that WR Cam Meredith could be let go. He’s big, imposing presence on the outside. Perhaps Humphrey will be that diamond in the rough they were searching for.”

Amos Morale III: “WR Cyril Grayson, Jr. The Saints have traditionally liked bigger receivers but Grayson has elite speed. The four-time NCAA track and field champion flashed how dangerous that speed is during OTAs and minicamps blowing past Saints defenders almost daily. He’ll face tough competition to make the squad with Michael Thomas and Ted Ginn Jr. entrenched as the Saints top two receivers and Tre’Quan Smith and Keith Kirkwood both showing their potential in their rookie seasons. But with his speed, the former Rummel standout could be the player landing the fifth or sixth receiver spot depending on how many the Saints keep.”