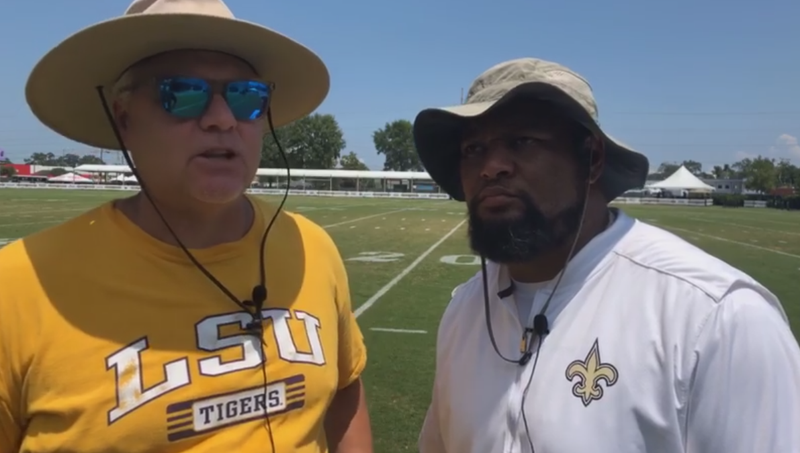 The Saints are well into training camp and expanding the basic install of offensive and defensive plays/packages.

Today the team focused on Red Zone run period.  The Cajun Cannon Bobby Hebert looked on with a watchful eye.  “The defense with their run fits were pretty stout against the run.  Overall I’d have to say our red zone run defense was very good,” Hebert explained with a smile, after the drill.

Saints color analyst Deuce McAllister watched running backs vs linebackers in a pass protection drill.  McAllister described the drill as, “up and down.”  But who impressed?  Deuce said, “Dwayne Washington did a pretty good job.  I thought Latavius Murry took care of business in pass protection.”

Bobby and Deuce pointed out a couple of rare mistakes from a usually very reliable receiving threat.  The two Saints legends singled out two drops in four plays by running back Alvin Kamara.  “He was clearly frustrated by the drops,” said the Saints all-time leading rusher.  “That surprised me.  He’s usually so reliable.  I think the heat got to a couple of guys today,” McAllister said as he raised his eyebrows.

Lagniappe:  It didn’t take long for Drew Brees and Michael Thomas to re-connect.  In a team red zone passing situation their chemistry reignited.   Brees found the newly minted millionaire wide receiver outmuscling a defensive back for the score.  Brees to Thomas….fun to watch.   Wide receiver Austin Carr is starting to get a lot of attention too.  With WR Emmanuel Butler, and Keith Kirkwood banged up, Carr is getting some valuable reps and taking advantage.

sports
Should Trevor Lawrence try to steer himself away from the Jets?
music
Dustin Lynch and Mickey Guyton aid farmers during COVID with 'The Farm Must Go On' concert
music
Lauren Jauregui says sexual comments about her with Camila Cabello made her 'feel like a predator'
music
RADIO.COM LIVE Check In: Garth Brooks and Trisha Yearwood reveal there's another 'legend' singing on 'FUN'
news
Trump, Biden fight for Florida, appeal for Tuesday turnout
news
3 dead in church attack, plunging France into dual emergency