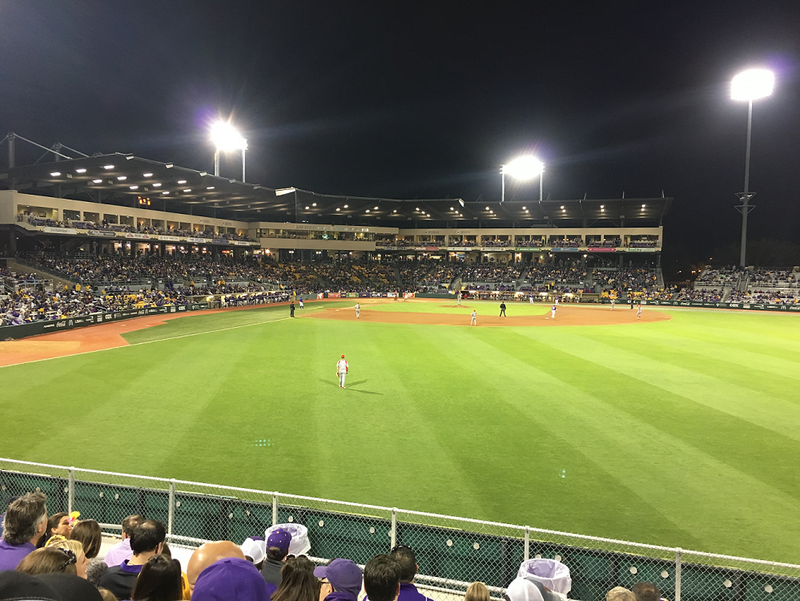 Adversity has struck LSU baseball.  The Tigers are dealing with injuries to three key contributors and another frustrating mid-week loss to ULL as the Purple & Gold stare down the barrel for a three game series with the Florida Gators starting tonight in Baton Rouge.  Here is a breakdown of the matchup:

Florida pitching:  This isn’t the typical Florida Gators baseball team we’re used to seeing.  It’s a down year for Kevin O’Sullivan and company.  Florida doesn’t have Brady Singer anymore as a Friday night ace.  Florida’s team ERA is an eye popping 4.64, which is dead last in the SEC.  Florida is known for their great pitching over the years; that’s not the case this season.  Sophomore right hander Tommy Mace (6-3) is the ace of the staff.  Mace has logged 56.2 innings pitched striking out 48 hitters while holding opponents to a .245 batting average.  He’s a big right hander who loves to get ahead early with his fastball and put hitters away with a nasty breaking pitch.  Florida pitching has surrendered 41 homeruns...the most in the SEC.

LSU game plan:  Finally LSU will get to see some right handed arms, after getting pummeled by left handers against Missouri.  The Tigers hit right handers and typically hit them pretty hard.  I would expect LSU to be aggressive early at the plate in at bats.  Tigers hitters should go up there hunting the fast ball especially against Tommy Mace in game one.  Keep an eye on freshman Cade Beloso; he’s starting to really heat up at the plate.

Florida offense:  The Gators can hurt you at the plate.  Florida is 5th in the SEC in hitting, with a team batting average of .289 with 42 home runs, tied for third best in the conference.  Florida likes to run the base paths; they're 34-49 in stolen base attempts.  Florida has four hitters in their everyday line-up, hitting above .300 for the year.  Brady McConnell paces the Gators lineup with a .373 average and 8 home runs.

LSU game plan:  Throw strikes.  The command issues that plagued the Tigers early in the season have started to rear its ugly head again.  LSU is short on healthy arms this weekend so getting quality pitching from the bullpen will be a big factor in this series.

Florida defense:  Florida’s defense is about average.  As a team their fielding percentage is middle of the pack in the conference at .972.

LSU pitching:  Friday night ace Zack Hess could pitch this weekend out of the bullpen as he attempts to recover from a pulled groin muscle he suffered last weekend against Missouri.  Hess won’t start game one, but coach Paul Mainieiri expressed some optimism that he’ll get on the mound out of the bullpen at some point during this series.  Now that leaves the question, who’s going to start game one?  Sophomore Ma’Khail Hilliard will get the ball tonight.  Hilliard has starting experience going back to last season, when he was LSU’s Sunday starter.  Hilliard won’t blow it by people, but is crafty with good command.  He’s not a typical Friday night guy in the SEC, but he’s more than capable of getting the job done.  LSU’s pitching staff has compiled a 4.27 team ERA; that is in the bottom third of the SEC.

LSU offense:  The Tigers might see the return of two big bats in the lineup tonight.  Chris Reid (hamstring) might return to the four hole according to Paul Mainieri.  Reid injured his hamstring last weekend against Missouri, and could have played in the mid-week game against ULL, but LSU decided to play it safe and rest him.  Zach Watson is also nursing a groin injury and could barely walk in the middle of the week, but amazingly enough coach Maineiri says Watson has a chance to return to the lineup tonight.  Watson is the team’s leading hitter with a .357 average.  Antoine Duplantis is really starting to slide.  His average has plummeted to .284 this season. Both LSU and Florida are at the bottom of the league in stolen bases with 34 on the season.