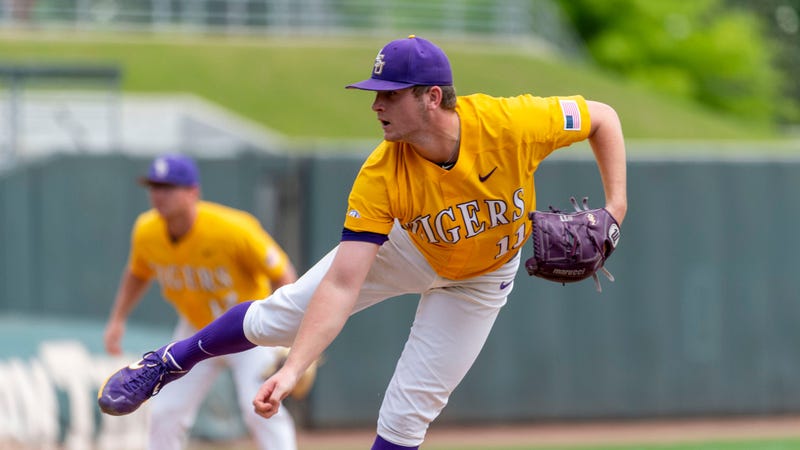 February 6, 2020 02/06/2020 3:32 pm
The Tigers are four days into spring practice; and after media day, we have a better understanding of how the pitching rotation and hitting lineup might look on opening day.

Hal Hughes is a player who has limitations at the plate and with his speed. However, don’t be surprised if by season's end freshman Zach Arnold ends up supplanting Hughes in the lineup. Arnold is working his way back from a rib injury and won’t be available to play until the middle of March according to Coach Paul Mainieri.

This lineup will undoubtedly change. Mainieri has a history of tinkering with his lineup through the entire season in order to determine the most productive batting order for the post season. Keep an eye on freshman catch Hayden Travinski. He could crack the lineup behind the plate to give Garza a day off, or he could slide into the designated hitter (DH) role. If Travinski starts behind the plate, Garza would likely be the DH.

Another thing to consider is putting DiGiacomo in the nine hole, which would basically create two leadoff hitters. “Gio” could be near the top of the line up in the two spot, but that would give LSU four straight lefties to start the order. Against right handed pitchers, Mainieri might use DiGiacomo behind Cabrera.

Also keep an eye on Cade Beloso this season. He has elite power, smashing 10 home runs last year as a true freshman. I could see him doubling his home run numbers from his freshman campaign. The Tigers could have three guys who hit double digit home runs and perhaps another pushing the double digit mark.

Daniel Cabrera hit 12 home runs last year. Saul Garza hit 5, and he could easily double that mark. Zack Mathis is the wild card. He has some surprising power and understands the strike zone. The lineup has four lefties and five righties, so there is good balance.

LSU is absolutely loaded with pitching. The question becomes: can they stay healthy?

So far through the fall and spring, the Tigers' pitchers haven’t suffered any arm injuries. The baseball operations searched high and low this off-season to combat the amount of arm injuries suffered last year.

An assistant on the baseball staff uncovered a device called the Motus Sleeve. This thing is fascinating. Pitchers can wear it on their throwing arm, and a tiny chip is inserted in the sleeve at the elbow. The analytics department of the team can then download information which can alert the coaching staff if a pitcher is vulnerable to an arm injury.  The Motus Sleeve can tell the coaches if a player is a greater risk for injury and would allow them to decide if a pitcher should take a day off from even picking up a baseball let alone throwing one.  I don’t know exactly how it all works, but hopefully it helps.

Labas has been in Baton Rouge for two years but had injuries that held him out for the entire season last year after receiving a medical red shirt. In 2018, Labas appeared in 13 games for the Tigers. Coach Mainieri is very high on Labas and thinks he could eventually be a Friday night starter (ace of the staff). Marceux looks like a completely different person this spring. As a freshman he was 190lbs, but he dropped 15lbs this offseason through diet and exercise. The freshman right hander told me, "You are going to see a very different Landon Marceaux this season." This weekend pitching rotation could turn into one of the best in the country if healthy.

And here's how the bullpen is shaping up.

I expect junior right hander Devin Fontenot to be the closer out of the pen. LSU famously didn’t have a single left handed pitcher on the staff last season. That changed quickly. The Tigers now have three lefties they can trot out in relief.

Brandon Kaminer is a junior college transfer from Wallace College. Freshman Jacob Hasty is also a left-handed arm for LSU out of Keller, Texas where he was a 2019 All-State baseball player at Liberty Christian High School. The third is a walk-on named Michael Lagarrigue. He’s not a lock to make the final roster, but the Tigers do like him a lot.

Veteran arms are aplenty for LSU in relief out of the bullpen.

Senior righty Mathew Beck will be a valuable arm out of the bullpen in a long relief spot. Coach Paul Mainieri plans to use sophomore Jaden Hill in relief early in the season, but he could be a weekend starter by season's end. Hill pitched two outings last season before developing pain in his right arm that sidelined him for the remainder of the year. Mainieri is going to pick his spots as to when Hill will come out of the bullpen regardless of the situation and score of the game. The goal is to make sure he’s completely healthy before they decide if they want him back in the weekend rotation. Hill’s fastball has averaged 94 to 97 MPH this off-season.

Ma’Khail Hilliard is another veteran arm that can eat up some innings if need be. Trent Vietmeir is another pitcher with experience that really shined in relief late last season. LSU will carry 16 pitchers this season, and 13 of them are veterans with experience.

Lagniappe: Preseason polls are flat out silly, but the Tigers are ranked #11 in both the D1 baseball and Collegiate baseball poll. Preseason rankings are worthless. Look no further than last year’s preseason poll that had LSU ranked #2 nationally only to finish 14th. Don’t be surprised if this LSU team is better than expected. The pitching staff is where this team is going to make some noise.