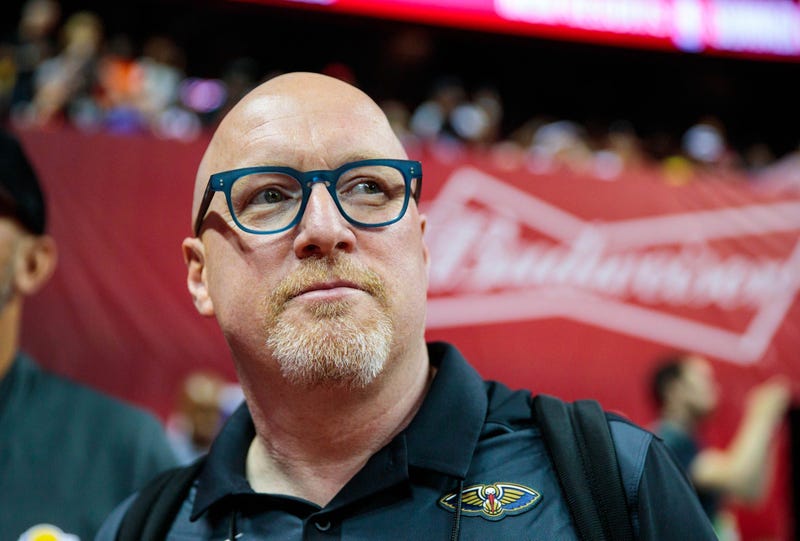 As we recently passed the one-year anniversary of the Pelicans' shocking draft lottery victory, the luck-of-the-draw that led to the ability to draft Zion Williamson #1 overall, it feels like a good time to look back and see just how far this organization has come in a little over 366 days.

As such, this is the first piece in a five-part series analyzing the growth of the Pelicans over the last year, and the process started about a month prior to that stroke of lottery luck.

After years of failing to build anything resembling a legitimate contender around superstar Anthony Davis, the Pelicans finally handed longtime general manager Dell Demps a pink slip in early 2019 and began the search for the next person who would attempt to helm the Pels' ship into championship waters.

The man who built a championship team around LeBron James in Cleveland was named Executive Vice President of Basketball Operations on April 17 of last year. It's a wordy title, but the basic job description should essentially read, "The buck stops here."

Griffin is the top of the food chain where New Orleans pro basketball is concerned, and he would put his stamp on everything the organization did over the next few months as he instituted a complete front-office overhaul, and that process was fast-tracked thanks to the Pelicans securing the #1 overall pick in the 2019 draft and the rights to select the most hyped college product in decades.

With at least a little bit of knowledge where this team would head in the immediate future, Griffin set about assembling his team. on May 19, he poached Trajon Langdon from the Brooklyn Nets, where he had helped turn an NBA afterthought into a playoff team in short order. Langdon was named the team's new General Manager.

Then on June 10, he added Swin Cash to his staff as Vice President of Basketball Operations and Team Development. Cash was an all-timer in the WNBA, as evidenced by her selection to the Women's Basketball Hall of Fame earlier this year. Positioning her in charge of player development made her an invaluable resource on a team expected to be brimming with young talent needing seasoning.

Griffin also managed to snipe Aaron Nelson away from the Phoenix Suns, naming him Vice President of Player Care and Performance. Nelson has long been considered the top trainer in the NBA, and one of the biggest obstacles to the Pelicans' success during the A.D. era was a seemingly-neverending assortment of injuries sidelining the players that meant the most to the team.

With Nelson's hiring, Griffin was looking to insure that injury would not be an excuse for the Pels.

With all these pieces in place, and with the NBA Draft fast approaching, Griffin executed the blockbuster trade of the Pels' disgruntled star. Not only did Griffin send Davis to his preferred destination in the Los Angeles Lakers, but he also managed to command a king's ransom despite Davis having done his best to torch the trade market with his early insistence that he wouldn't play for anyone but the Lake Show, a threat he walked back only slightly later on.

But that's not all.

Griffin also extracted a metric buttload of draft capital as part of the deal with three first-round draft picks, two of which have stipulations that allow the Pelicans to get the most bang for their buck possible, the other being the #4 overall pick in the quickly-approaching 2019 NBA Draft.

That fourth pick would get flipped again on draft day for another fresh haul of picks, leading to a bountiful 2019 draft haul.

The Pelicans did what everyone expected in using their own #1 overall pick to take Zion Williamson, the potentially franchise-transforming talent out of  Duke.

From there they took center Jaxson Hayes out of Texas with the eighth pick of the first round, then grabbed Virginia Tech guard Nickeil Alexander-Walker 17th overall and took Brazilian small forward Marcos "Didi" Louzada Silva in the second round.

While Silva would be sent to play in Australia for additional development, Williamson, Hayes and Alexander-Walker joined Ball, Ingram and Hart, as well as Italian transplant Nicolo Melli as part of a roster overhaul that was almost as complete as the broom that swept through the front office.

All-around two-way guard Jrue Holiday and 3-and-D man E'Twaun Moore were the only key contributors from the Anthony Davis years to retain their spots on the new-look Pels as the gears were set in motion for a complete revamp of the culture of professional basketball in the Big Easy.