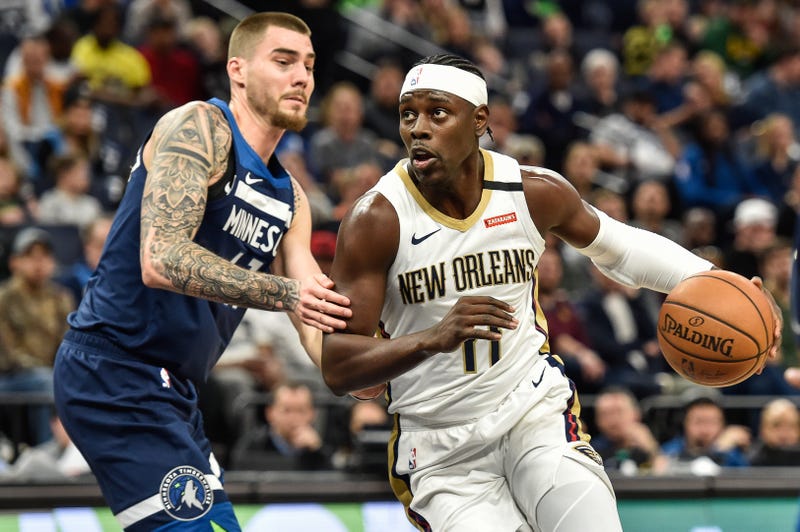 When the NBA sends 22 teams to Orlando next week in service of finishing their current season sequestered away from the population at large and hopefully the pandemic raging through it, they will embark on an experiment unlike anything we've seen in pro sports.

And Pelicans guard Jrue Holiday is here for it.

Holiday's participation in the NBA's "bubble" was thrown into question with the announcement that his wife Lauren is pregnant with their second child. Holiday took a leave of absence from the team during her first pregnancy as she was also dealing with a brain tumor at the time.

This time around though, Holiday said his family is in better shape medically.

"I'm going," Holiday said Wednesday during a Zoom chat with New Orleans sports media. "Making that decision with my wife, I'm pretty sure everybody knows the medical history with our first child. This one is great so far. My wife is healthy. The baby's healthy. I'm here to support my teammates. I'm here for this culture that we wanna build and put together, and at the same time I'm here to go down to Orlando and try to win."

Holiday said he's aware that this will be an unprecedented experience, and he echoed his coach Alvin Gentry's previous statement that the mental burden may prove as heavy as the physical one.

"We're going into a bubble," Holiday said. "We're doing something that we've never done before. That's already a mental challenge. Being able to adapt... Not being with your families for a month-and-a-half on."

Holiday said it'll be a much different proposition than a typical 10-day road trip.

"To go 30+ [days] can be difficult," Holiday said. "Again, another thing you have to adapt to. But I think coming together with your teammates and locking in, this will definitely give us the time to really see what we're made of and kind of build our chemistry."

In the end though, with a team that was rebuilt from the ground up in the offseason with a nucleus of young players, Holiday said he believes a lot of good can come out of the team's togetherness.

"I think this is more of a positive than a negative in that instance," Holiday said. "Being able to be with guys every day, and at this point, you're gonna see them all the time for the next month-and-a-half. I think building that chemistry, which we do feel like we've done a pretty good job of that, but building that chemistry... helps grow your team. Not just on the basketball court, but grows you more personally with other teammates."

The Pelicans will take the floor on opening night of the NBA's restart. They'll face the Utah Jazz on July 30.