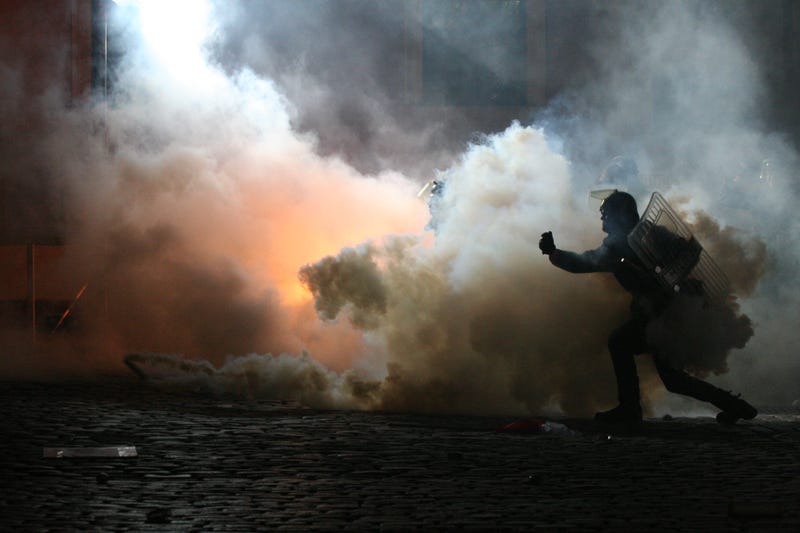 Looting and riots dominated the headlines from Chicago this weekend, but in truth, there’s more than enough to talk about in Seattle, St Louis, Louisville, Philadelphia, Baltimore, and New York - but let’s focus on Portland for a moment.

Portland Mayor Ted Wheeler has spent weeks blaming President Trump and his Federal officers for being the primary cause of rioting in the streets of his city. That Mayor demanded the removal of Federal law enforcement officers from the confines of the Federal courthouse building, saying that they were the direct cause of what was going on outside. An alleged agreement was reached between the Oregon Governor and the President, and the Department of Homeland Security stepped down. The Governor described that action one way, DHS another - all political posturing. The Governor said the Feds capitulated to the state, the Feds described it as a stand-down during a period of observation in order to ensure the Governor was holding up his end of the deal by sending in state troopers. He started to dismantle the riots and protests that were happening there.But guess what didn’t happen? They hoped the riots would subside, but they did not. They continued their pattern of disobedience, disruption, and destruction, turning from the Federal courthouse to local police stations, businesses, and even residences. Is it that hard to believe that the rioters’ vitriol and thirst for destruction actually increased? Not to me.

Consider the following. Trump was supposedly to blame for all of this, but now it’s gotten worse and now, they’re changing topics. Wheeler says, “Don’t think for a moment that, if you’re participating in this activity, that you’re not being used as a prop for the re-election of Donald Trump. Because you absolutely are, you are creating the B-roll that will be used in ads nationally, and if you don’t want to be a part of that, don’t show up.”Is that credible leadership? That's the best card you have to play right now, Ted?

I always say “give them an inch, they’ll take a foot; give them a foot they’ll take a mile.” And that’s exactly what they’ve done. They've turned the city over to these people, these anarchists, whatever you want to call them. And now innocent citizens are getting their brains beat in, business owners losing their life’s work in a single night, all for the sake of city leaders wanting to be the political beneficiaries of this situation, and not wanting to get at odds with their base. That's not credible leadership, and now they’ve got nowhere to go.

So now what? Now all of the tactics and instrumentalities they found so obnoxious, when the Feds were using them, are now being used by the state and local police. They’re declaring a riot almost every night in Portland, because under Oregon state law, you can’t deploy these less-than-lethal tools unless you declare a riot. They reach that pinnacle every evening and do exactly the same things that were called obnoxious, overreaching, Gestapo-like tactics, when the Feds were doing it. And now guess what the media has to say about it? Crickets.

This is how bad it’s getting - they tried to burn down a police precinct building the other night while attempting to block the exits. There were officers in that building. And for the first time, Wheeler thought maybe he needed to start to criticize these actions now that they’ve risen to attempted murder. Well done, Ted. You finally figured out that someone is going to get seriously hurt here.

It’s amazing the extent that people will go to to talk around the issues instead of just staring the obvious in the face. This is a group of thugs that need to be treated like thugs and face the consequences of their actions! Every night! No exceptions! No retreat! Never back down! Keep the offensive going. Because when you don't, you get what you saw on the streets of Chicago this weekend.