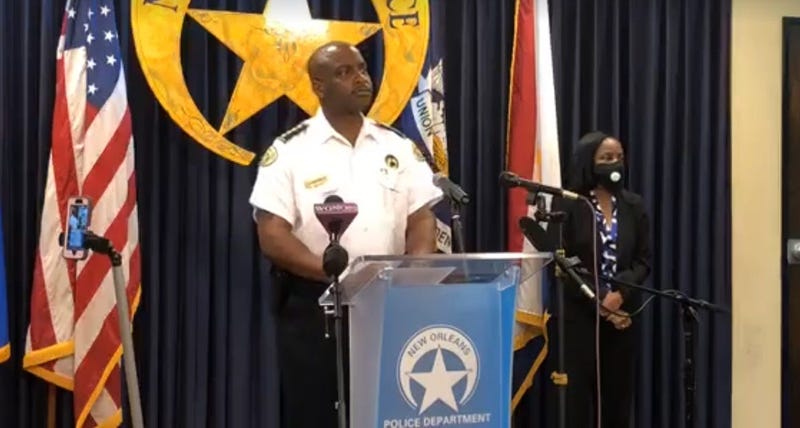 New Orleans Police Department Superintendent Shaun Ferguson joined Newell on the radio Friday afternoon for a wide-ranging interview that touched on the challenges that police forces all over the country are facing as city officials tighten regulations and rework budgets even as murders, shootings, and other violent crimes tick up - sometimes dramatically so.

“Chief, I know there’s been a lot of challenges in this community,” Newell began. “I sense the frustration in your voice, and I’m sure that frustration runs throughout the department. How would you assess the morale at NOPD today?”“It’s been steady - I can’t say it’s very high, but I can’t say it’s very low either,” Ferguson said. “Our officers have really been engaged and stayed committed. You see departments across the country are losing officers right now, but we’re seeing the same level of separations we saw in 2019. They’re maintaining and are still committed to doing their jobs, while also feeling the stress, but we’re doing our due diligence and we’re encouraging them to take time off when they need it, get assistance and we’re giving them the resources to do that. They’re staying the course.”“What is their reaction to what they see going on in other areas of the country?” Newell continued. “We haven’t experienced the full breadth and depth of what they have in other cities.”“What we have been successful at in our department is realizing it isn’t about the New Orleans Police Department specifically,” Ferguson answered. “We’re all human and all have feelings and passion about our occupation as law enforcement professionals, but we realize this is bigger than us. We’ve been constantly messaging internally to ‘keep your head up.’ You know, we’ve been meeting these calls for reform and more for the last four or five years, so there’s no reason to be down on ourselves. I told them, I have to do a better job of educating the community and making sure they know where we stand as a department, and not take these protests and the positions many of our community leaders are taking as a personal affront.”“Have you been surprised by some of the reforms that have been demanded?” Newell asked. “We’ve both been in this business a long time, trained side-by-side over the years… me, I’m a little mystified by some of these requests that actually, we’ve been training on for fifteen or twenty years! This concept of implicit and explicit bias has come up again and it’s almost as if we’re trying to repackage and rebrand things we have consistently been trained on. Your thoughts?”

“You’re seeing copycats, more or less,” Ferguson said. “You’re seeing some communities just following what they see occur on TV and it doesn't necessarily apply here. That’s why we have to have the deeper conversation about what it is that you are getting or not getting from our law enforcement agencies. In New Orleans, we are doing a heck of a job with regards to those reforms and we just have to educate our community and ensure they know what policies are in place, what training we have to adjust those concerns they have. Otherwise, we’re just reinventing the wheel, because we’re already doing what is being asked.”