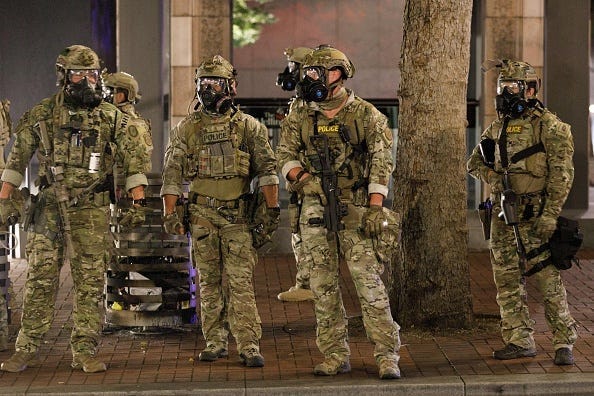 The Heritage Foundation has published a piece by Jim Carafano titled “The Portland Predicament: Walking the Line Between Homeland and Domestic Security.” Newell invited Carafano onto the program Thursday morning to discuss the piece. Carafano is the Heritage Foundation’s leading expert in national security and foreign policy.“As someone that was in law enforcement for 40 years, I was really curious about this distinction you were making between ‘homeland’ and ‘domestic’ security and the history of the same in the United States, comparing it to Europe. How can we simplify that difference?” Newell asked.

“Homeland security is really an extension of national security, of protecting the inside from the outside,” Carafano said. “Bad guys are trying to get in and do bad things - you think about tampering in elections, terrorists coming to the United States. We had to create some kind of domestic security architecture, and even though we try to do law enforcement at the state and local level, over time we saw the need for national jurisdictions, which gave rise to the FBI and everything else.  Now, we can’t have two FBIs, one that deals with national security and one that deals with interstate crime, so we have one that does both. That’s where the merger between foreign and domestic security comes in. There are two fundamental reasons why Federal law enforcement shows up in our communities - one, they’re enforcing Federal law. If Federal laws are being violated, it’s up to the Federal government to go in and enforce them. The other reason is we have situations where city and local law enforcement is overwhelmed, and Federal assistance is needed. The reason I wanted to map that out is that when people look at the Federal presence in Portland as an occupying force, the reality is that what the Department of Homeland Security did is completely consistent with its authority under the law.”

“It seems like people are trying to blur the lines and perpetuate a story for whatever their political ideology is,” Newell continued. “Obviously the backdrop of the national election on November 3 has a lot to do with it. But the fact is, they had every right to be there, should have been there, waited too long, quite frankly, to supplement the forces that were there early on because they were overwhelmed!”

“The Federal government has jurisdiction and responsibility for the Federal building, but not the surrounding streets and areas,” Carafano replied. “What was happening was that every night, after the protests were petering out, these organized groups would come out and attack the Courthouse. What the Feds told the state was that they had to put a presence there to protect it, and if you’d police the streets around it, they wouldn’t be able to organize these attacks and there will be no need for our presence, and we’ll drawit down.”