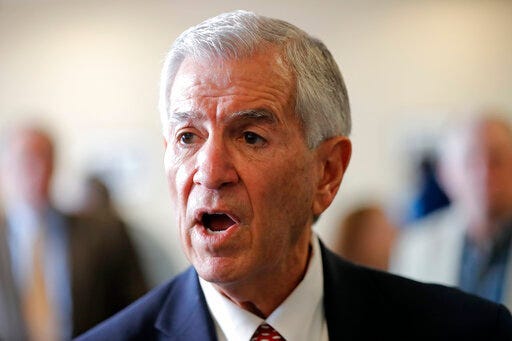 The GOP-financed organization ‘Truth in Politics’ has found a new avenue to attack Governor Edwards, this time in regard to coastal restoration projects. They claim Murray Starkel, who was Edwards’ roommate at West Point, has been given favorable treatment in contracting for the work. Newell invited the Chairman of the Coastal Restoration & Protection Authority Chip Kline on the program Wednesday morning to discuss the veracity of the ad’s claims.“They’re saying this is nothing but a sweetheart deal,” Newell began. “It’s a deal that has never been consummated, but they continue to say that there’s an inside track, that there’s other things here that are concerning... Chip, I’ve looked through this, these documents I’ve requested. In regard to who gets these contracts - this is a determination that does not lie solely with the CPRA, correct?”“That’s correct. But before we get into the nuts and bolts of the ad, it’s important for me to set the stage here on how this concept came about. Since the inception of the CPRA, we’ve had legislators, Parish Presidents, multiple stakeholders across the region, pressing us to engage the private sector more in our hurricane protection and coastal restoration efforts. That’s something we as an agency are committed to doing, it’s something we need to do to be successful. I don't think a single state agency can do this alone. As a result of that, there was bipartisan legislation introduced in 2017 that gave the CPRA contracting authority to utilize what we refer to as ‘performance-based contracting.’ It’s another tool in our kit to implement coastal restoration projects across South Louisiana.“In response to that bipartisan legislation, which passed unanimously in the State Senate and House of Representatives, the CPRA then issued an RFIQ, a Request For Statement of Interest and Qualifications to the public, so anyone who felt they were qualified and had an interest in this work could have submitted their statements for us to look at. And when I say anyone, I mean anyone in this country could have submitted a proposal. We received six submittals, teams consisting of 10-12 different companies with vast expertise in surveying, geotech, dredging, environmental services, engineering, etc. We advanced all six of them - every single team went to the next phase, where we considered their financing, their land rights, where their sediment would come from, etc. As a state, we rejected every single proposal.“Throughout this entire process, there was significant oversight from the Trump Administration, because the funding came from BP oil spill dollars, which comes with oversight from the Corps, the Department of Commerce, the Department of the Interior, all of these agencies watching to make sure we were abiding by the law and adhering to ethical standards. So to be clear - when we’re talking about how we rejected these bids - there is not a single entity, firm, business that is currently positioned to get any work from the CPRA as it relates to performance-based contracting.”“If you watch these ads,” Newell said, “You were made to believe that these submittals are made by individuals. In particular, they pull out Mr. Starkel but he’s just part of a team, right? Not unlike the other bids - these are all a conglomeration of companies that play different roles in the overall scope of the project, is that right?”“That’s exactly right,” Kline answered. “There was not a single submittal we received that was from a specific individual. The ad is focusing on one team,referencing one individual on a team that consisted of 10-12 different firms and companies across coastal Louisiana.”“They make one representation that in this particular project, he has none of his own employees,” Newell said. “That may not be out of the ordinary if he is to be providing project management services unique unto himself. I’ve seen those types of submittals even at the Jefferson Parish Sheriff’s Office.”“The ad airing on TV is glaringly lacking in facts. There is no factual information in that ad,” Kline reiterated. “Obviously I know political campaigns get heated and ads like this run, but I think it’s important for your listeners to hear me say this: Governor Edwards has never, not once, not a single time, asked me or anyone in a leadership position at CPRA to consider a particular firm for a contract, nor has he ever dictated to me or told me to issue a contract to a particular firm for any contract that CPRA has issued.”“What I find a little bit ironic,” Newell continued, “Is this particular team that Mr. Starkel is a representative of… in the tabulation sheet, they finished third. With the amount of oversight you’re talking about, I can’t imagine for the life of me they’d end up being the chosen one and finishing third out of four.”