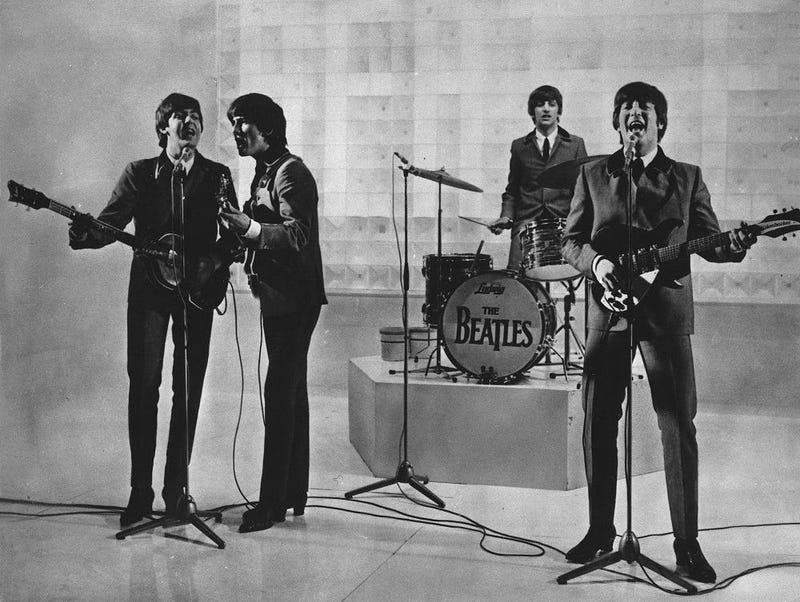 The Beatles appeared for the first time on American television on the popular Sunday variety show, The Ed Sullivan Show, on February 9, 1964. That night was the first obvious signs that a new, rebellious young generation was ready to change the world of music and fashion forever.

The Beatles-led British Invasion had an instantaneous impact on popular music. Just two months after The Beatles appeared on The Ed Sullivan Show in 1964, the top five songs on Billboard’s Hot 100 chart were songs by The Beatles.

No other group or artist in the history of the Billboard Hot 100 chart had ever occupied the top 5 spots and no other group or artist has had that distinction. In addition to holding the top five spots, The Beatles had seven more hits in the Hot 100; and the British band that immediately followed The Beatles to American pop culture was The Dave Clark Band, which had two hits in the Hot 100. With only two months of exposure in America, it was obvious times were changing.

Not only was the music of The Beatles different, but their style was equally as unique. Looking at the hair styles of The Beatles today makes it hard to believe that those styles were controversial and challenged the status quo of the establishment; but in the context of 1964, the mop top style of the hair of the Fab 4 was nothing short of outrageous. The music of The Beatles and the British Invasion and the fashion it ushered in was a young generation’s way of rebelling against the establishment.

The music and the fashion of the 60s was visually manifested when The Beatles made their first appearance on American television, but the seeds of change were first planted 3 month earlier when President John F. Kennedy was assassinated. That moment in time was the catalyst for a young generation’s desire to reject and rebel against the establishment, which that had subconsciously lost faith in; and the new music and fashion were adopted to make the distinction.

The British Invasion gave birth to a new spirit in a young generation. Within a few years hippies carried the torch of a rebellious generation that showed their collective contempt for the establishment by standing for free love, drugs, equality and viewing politics from a different perspective.

The soundtrack of the rock musical “Hair” shocked the American establishment with daring lyrics about sex, drugs, equality regardless of race, religion or sexual orientation. Those were the morals of the Baby Boomer generation, which in many ways lost the principles it so strongly represented.

The end of the righteous crusade of the Baby Boomer generation ended as the 80s began and Boomers were making money, having children and competing for the best jobs and having an expensive car and a nice, big house replaced the goals that had motivated Baby Boomers for nearly 2 decades.

The music and fashion of the 60s were earthshattering and highly controversial – from the hair styles to the miniskirt that seemed to promote the idea of sexuality. Looking back on each generation that has made its mark on the world through its music and fashion, the Baby Boomers from the 60s set a standard that has been hard to beat.