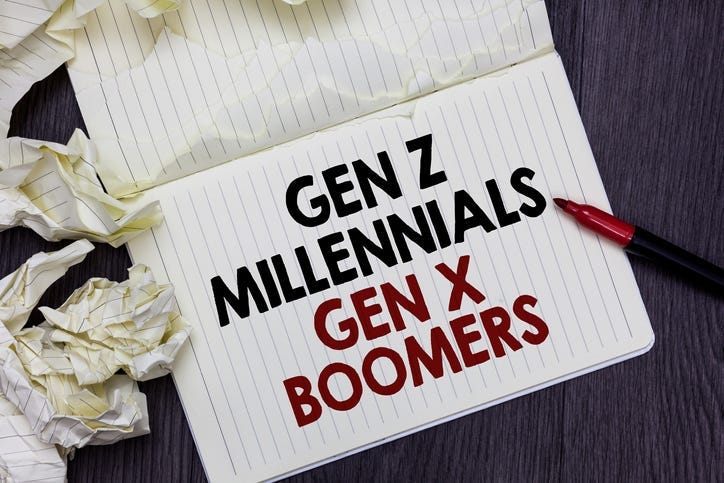 The Baby Boomer generation has defined every era it has gone through by virtue of the fact that Boomers made up the largest portion of the American population. Naturally, the generation with the most people would be the richest target for marketing and setting societal trends. That was the Baby Boomers. Today, 75.4 million people in America are Baby Boomers and 83.1 million are Millennials.

Baby Boomers no longer account for the largest percentage of the population in America and also are losing their collective spending power.

Here is the basic breakdown of the generations:

As a radio talk show host, I have heard contempt for Boomers and Millennials. Boomers generally believe that Millennials have no realistic sense of reality, are a self-centered generation that doesn’t want to work and are the product of the “everyone gets a trophy” mentality.

Millennials blame Boomers for the nation’s growing deficit, the threat that they will use up Social Security, for not having done enough to curb climate change and basically having fueled the great political and social divide in America today.

On the social media site - TikTok - generational warfare has broken out between Boomers and Millennials. The words, “OK, Boomer,” have become a derogatory response from Millennials as a dismissal that Boomers even matter at this point.

Generational warfare is nothing new. Baby Boomers declared war on the establishment and because the first generation known as the “anti-establishment” generation. Contention between generations is normal, but what makes the current battle between Boomers and Millennials is the fact that the trendsetting control Boomers had on society is eroding - and not without a fight.

Millennials have not only overtaken Boomers in numbers, but they are also an extremely ripe consumer target, in part, because as a younger generation their brand loyalty is less established. It would be easier for a beer manufacturer to change the mind of a Millennial than a Boomer, whose brand loyalty is more solid.

While there is certainly a massive amount of marketing to the aging Boomer generation relating to where they are in their lives, Millennials have been setting trends that were once set by Boomers.

It is interesting to hear some of the things Baby Boomers say about Millennials - “They have no direction,” “They don’t understand the real world,” “They expect the world to be idealistic,” and “They are self-centered and self-righteous.”

The maturing of Boomers and the growing influence of Millennials are colliding and creating unrest in society. We don’t yet know what the end result will be - but the reality is that Millennials will one day be the establishment.

In the 80s, the collective attitude of Baby Boomers shifted from the free-spirited, anti-establishment generation to a powerful group of consumers with a new focus on their jobs, families, the houses they owned and the cars they drove. The maturation of Boomers fueled the conservative movement in the 80s, including the election and re-election of Ronald Reagan. So many who defined themselves as Democrats because “Reagan Democrats.”

Will Millennials cling to their morals, values and beliefs - or - like the Baby Boomer generation - will they evolve and abandon what they once believed was important to society?