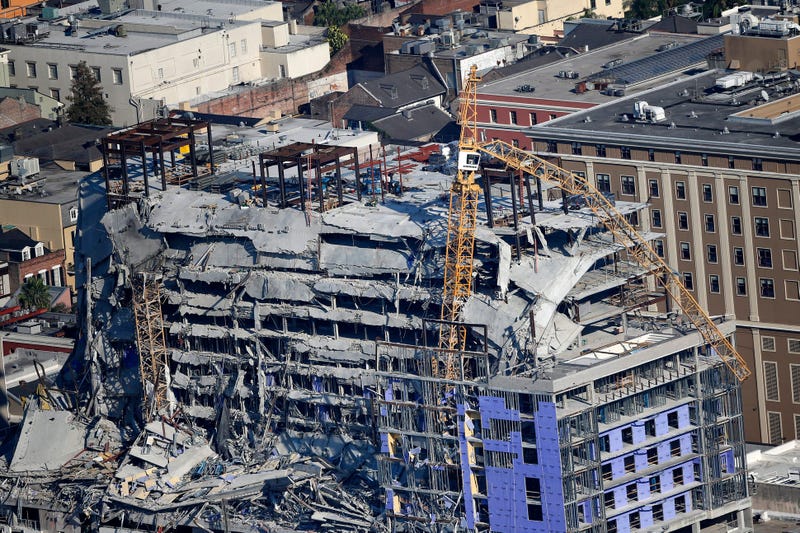 A strong wind shifted a red tarp the City of New Orleans put up to cover the exposed legs of one of the workers whowas killed when the Hard Rock Hotel structure collapsed on October 12, 2019.

People have taken pictures of the legs of the dead worker visible from the street and have shared the pictures on social media. That caused outrage from the Cantrell Administration. A statement issued by City spokesperson LaTonya Norton read:

“A tarp put in place to conceal the remains of one of the victims of the Hard Rock collapse has been shifted by the wind. The condition of the building and the altitude above street level complicate efforts to replace the tarp, as they have prevented recovery thus far.”

The City is asking residents not to take or share photos of the remains now visible. Norton further said:

“Capturing or sharing images of the victims in such a condition is irresponsible, it is indefensible, and it is not who we are as new Orleanians.”

It appears the city of New Orleans is condemning people for a problem that is actually owned by the City. Regardless of the project, it seems as if the City finds ways to delay action, and that always raises questions about those who may be attempting to secure financial gain. And there are legitimate questions about whether the City has properly handled the collapse of the Hard Rock Hotel. Implosion is now set for mid-to-late March.

Symbolic of a city that does not always handle situations with a competent approach is the fact that the administration chose to use a flimsy red tarp to cover remains. To put it mildly, the City’s decisionwas an undignified move, and I find great irony with the City’s harsh attack of citizens for taking photos of the exposed portion of the body when the City is to blame for using a makeshift solution to cover the legs of the body.

After the collapse, Mayor Latoya Cantrell vowed to make the removal of the partially collapsed structure a priority of her administration – but after 4 months of seemingly no visible progress – questions are being raised about how the city is handling the situation. And the questions are justified.

With appreciation for the safety of those who might have attempted to remove the two bodies that remain amid the collapsed structure, as well as those who might attempt to recover the legs of the deceased victim, it is difficult to accept that the City of New Orleans has no options.

It is “irresponsible, it is indefensible, and it is not who we are as New Orleanians” for the City of New Orleans to have made the decision to use a loose tarp to cover part of a dead body without understanding that wind could easily expose the visible legs of the body.