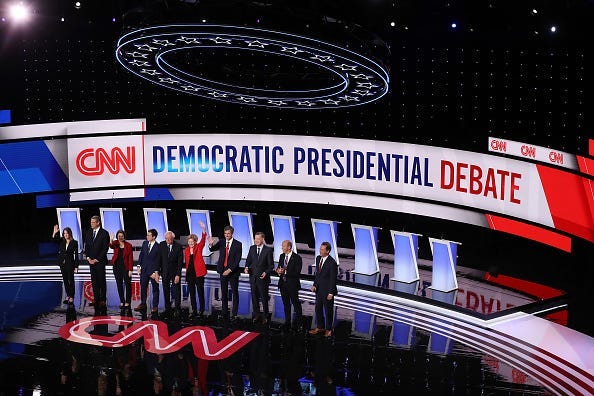 Rising up from the rubble of the Democratic debate last night was the obvious sign of a declared war of ideas between the progressive wing and the centrist wing of the Democratic Party - and this is good news for America.

Disdain for President Trump’s political attitude toward governing led to a rise in popularity of progressive candidates, which represent a complete overhaul of the country. Last night, it was obvious that the progressive wing of the Democratic Party is going to face a serious challenge from the centrists/moderates. In one way this could be seen as bad news for Trump supporters, but, ultimately, it is good news for America.

On my radio talk show, I have promoted endlessly the idea that a progressive-left Democrat or a far-right Republican cannot win a general election. As noisy as the progressives and the far-right are and as much attention as both factions receive from the media, elections are decided by the independent voters and the moderate Republicans and moderate Democrats.

It is not often that a host on “Fox & Friends” on The Fox News Channel will precisely echo my political observations, but it happened this morning when co-host Steve Doocy was talking about the rise in the moderate voices in the Democratic Party.  He told the Fox News audience that the key to winning any election is the “moderates.”

Progressives and the ultra-right do not have the numbers to control the outcome of an election - it is the moderates on both sides and the independents that sway elections. President Trump defeated the right-leaning candidates in 2016 and won the centrist Democratic voters, Independents and Republicans.

In the debate with 10 of the 20 Democrats running, the top progressives, Bernie Sanders and Elizabeth Warren both had good nights, and Warren was particularly strong.  However, the moderate voices from some of the Democrats exposed that the idea of giving away free things - even to undocumented workers - was not in the best interest of America, and that many of the progressive plans that have been proposed will not work.

Governor Bullock of Montana was a new face on the debate stage and provided a strong moderate voice while pointing out that 25% to 35% of his voters in his state voted for President Trump - meaning that he is a candidate who appeals to some Trump supporters.

Representative Tim Ryan of Ohio was another moderate voice that challenged the progressives when he said that we should not give free healthcare to undocumented workers while many Americans are forced to pay for their healthcare. It was curious that he did not put his hand on his heart during the singing of the national anthem. I have no idea if that was a statement or just a personal preference, but it did stand out.

But the candidate that stood out was the unconventional candidate that many, including myself, had dismissed as wacky. New Age author, lecturer and spiritual leader, Marianne Williamson made profound comments that accurately assessed America today. She criticized all of the Democratic candidates for accepting big money from corporate donors and hypocritically speak about moral authority saying, “I don’t think the Democratic Party should be surprised that so many Americans believe ‘yadda, yada, yada.’” OMG - a presidential candidate using a classic line from “Seinfeld.” Did she “yadda, yada” over the best part - no - she mentioned “moral authority.”

Texts from Fox News viewers made fun of Williamson’s descriptive comments, but her confidence in making bold statements surprised many.  Marianne Williamson was the most Googled candidate after the debate last night.

Part 1 of the 2-part Democratic debate will be remembered as moment the first real shots were fired in the war between the progressives and the centrists in the Democratic Party. It will be interesting to see of the more moderate voices rise up in Part 2 of the debate series tonight.

Before the comments about infighting within the Democratic Party gain traction, let’s remember that the Republican Party fought the same war during the campaign of 2016. That battle of political philosophy led to Donald Trump winning the Republican nomination. It will be interesting to see which Democrat will be standing alone at the end of the primary process.

The debate last night was a definite sign that America is not going to tolerate the extremes in either party - and that’s good news for every American who is not a right or left extremist.