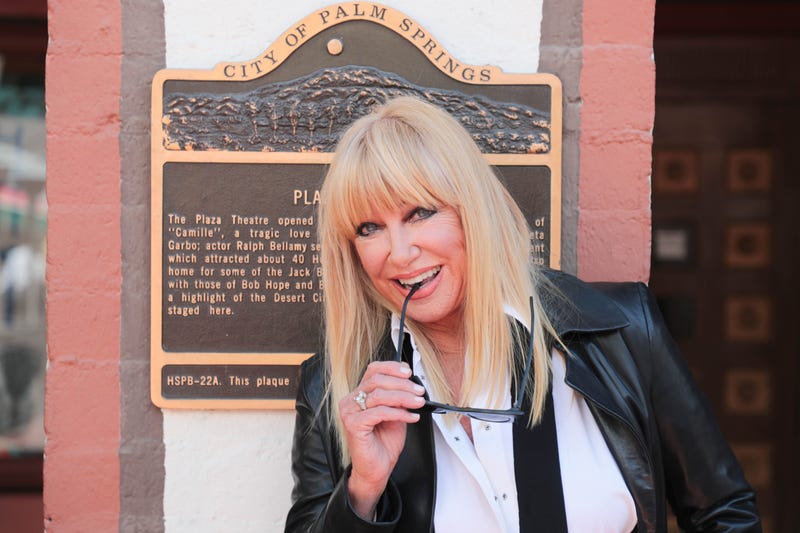 Actress Suzanne Somers, who played the blonde bombshell on the 70s sitcom, “Three’s Company,” surprised many when she celebrated her 73rd birthday by posting on social media a picture of her in her “birthday suit.” Yes, she was nude!

I’m sure many of the people who watched “Three’s Company” always wanted to see Suzanne Somers nude – but long before she turned 73!

The nude picture of Somers shows her without any clothes in a patch of grass and flowers in Palm Springs, CA. Her legs are crossed, and her arms are crossed covering most of her breasts. There is nothing obscene about the picture; but that did not stop some from being highly critical of the actress for posting a picture of her nude, especially at the age of 73.

At 73, Suzanne Somers looks great; and from what you can see in the picture, she still has a good body. So why not pose nude?

As you can imagine, some of the negative comments were straight to the point. One read: “Why…you are too old to be acting like this.” Another read: “Why would she do that? Not a pretty sight?”

But many of the comments to her social media post were complimentarily. One read: “You go girl! Way to rock your 70s. So inspirational!”

Another comment read: “Love this!!! Appreciate you being an example of the importance of loving our bodies and still feeling sexy at any age!”

Let’s first acknowledge that America is quite hung up on the idea of nudity at any age. Then there is the criticism of someone breaking the mold of being old and daring to pose nude on her 73rd birthday.

I often describe myself on the show as a “hostile witness to the Baby Boomer generation” because I disagree with much of the generational hypocrisy I see in talking about issues that involve younger generations. But there are some things that make me very proud of my generation.

Since coming of age in the 60s, the Baby Boomer generation has defined every era it has occupied because until now Boomers made up the largest percentage of the US population. Boomers were liberal in the 60s and 70s, but their change in attitudes fueled the conservative trend that started in the 80s.  The fact that jeans are acceptable attire almost everywhere, even in upscale restaurants, is a tribute to the Boomer generation’s influence as the establishment.

While Millennials now surpass Boomers as the largest percentage of the population, Boomers continue to influence politics and pop culture. The rockers from the 60s and 70s that are still touring today and still attracting the Boomer base is testament to the continuation of the Boomer’s quest to be young. There is little doubt that the Boomer generation looks and acts younger than every other senior generation that preceded them.

Statistics support the idea that even as seniors, Boomers are still very sexually active. I wonder if the collective desire to remain sexually active among Boomers necessitated the invention of Viagra and other ED-related pills or if the natural advancement of medicine led to pills that help people remain sexually active as they mature. Either way – Boomers took advantage of the new opportunities.

Suzanne Somers celebrating her 73rd birthday by posting a nude picture on social media is a microcosm for the youthful mentality of the Baby Boomer generation. I’m sure many of the people who are upset she did this would be the same ones that would have been quick to criticize her if she did it when she was a younger actress on “Three’s Company.” A prudish attitude transcends time.

I think we should celebrate Suzanne Somers, or anyone, for being happy enough with their bodies and still sexual enough to have the courage to post a nude photograph.

And think about this – to a 90-year-old man – Suzanne Somers is a hot, young babe!