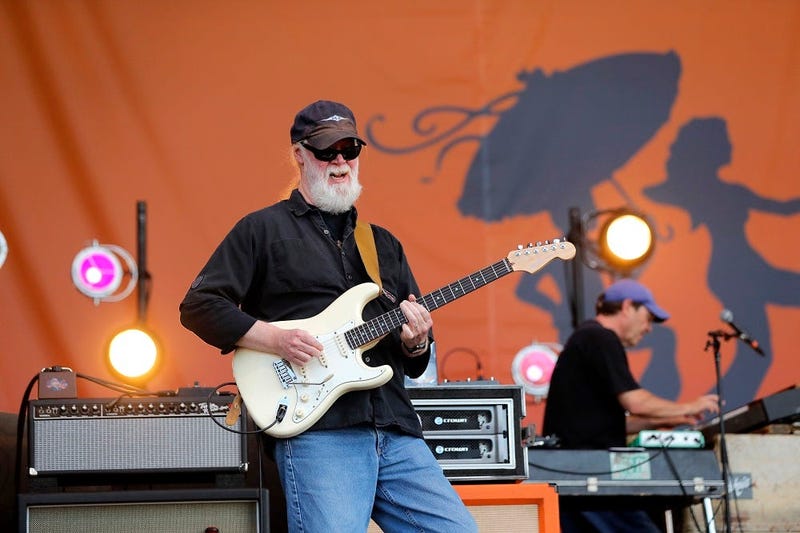 When the New Orleans Jazz and Heritage Festival announced that The Rolling Stones would play the festival for the first time as part of the 50th anniversary - excitement over this year’s fest exploded!  But not long after the tickets were all sold for that special day, it was announced that The Stones were cancelling because Mick Jagger had to undergo a heart procedure.  That led to widespread disappointment, and many felt that the big 50th anniversary celebration would lack something truly special.

The announcement that Fleetwood Mac would replace The Rolling Stones was met with a general malaise.  Sure, Fleetwood Mac is great; but they have played Jazz Fest and lost was the idea that an iconic band, like The Stones, playing the fest for the first time for the 50th anniversary.

About the time the news that Fleetwood Mac was replacing The Stones was accepted by the public, Fleetwood Mac cancelled, citing Stevie Nicks battle with the flu as the reason.  But that was several weeks away from the opening of the festival.  How could they be so sure Nicks would not have recovered in plenty of time to perform in New Orleans?  Don’t rule out the possibility that when it really sank in that Fleetwood Mac was 2nd choice to The Rolling Stones that they realized as good and popular as they are that they would have been a disappointment to the festival’s 50th anniversary celebration because they had played the fest.

Jam bands have loyal followers who travel to go to back-to-back shows because the improvisational nature of the music means that no two shows are ever alike.  Widespread Panic fans are more a community than they are fans, and the news that they would replace Fleetwood Mac, who was replacing The Rolling Stones sent feelings of elation through the community of Spreadheads.

Since Widespread Panic and arguably Fleetwood Mac were never equal emotional replacements for the legendary Rolling Stones, the Jazz Fest offered ticket refunds for that day.

With anticipation for Jazz Fest 2019 marred by the cancellation of The Stones and Fleetwood Mac, there was some concern that the 50th anniversary of the fest would not live up to expectations.

Was the 50th anniversary of the New Orleans Jazz and Heritage Festival a disappointment?  From my perspective as a Jazz Fest-goer from the beginning 50 years ago, I didn’t see or sense any disappointment.  It was an awesome fest – even without The Rolling Stones.

One day of rain and another day partially affected by rain were nothing unusual for the Jazz Fest, which is held every year in the tropical environment of New Orleans at the end of April and the beginning of May when thunderstorms a nearly impossible to completely avoid.  This year, like every other year, fest fans took it in stride; and those dedicated to certain acts embraced the rain and made it part of their 2019 Jazz Fest experience.  We have even deeper memories of the outdoor concerts we saw in the rain, which seems to bond fans for an artist as much as the music.  There were areas of mud, but it would be unfair to even suggest it was a mud fest.

One of my producers is a huge fan of Alanis Morissette, who played on the day it rained, and he dressed for the rain and absolutely loved being there.  Perhaps when we see our favorites in concert in the rain, we feel like we are showing them how dedicated we are to their music.  Fans get a sense of paying tribute to their favorite artists when they endure a hardship attending their concert.

The 50th anniversary of Jazz Fest included the many favorites, like Cowboy Mouth, Irma Thomas, Rockin’ Doopsie, Jr., Better Than Ezra and country/rock fiddle star Amanda Shaw, who at the age of 28 celebrated her 20th year of playing Jazz Fest!  It’s hard to believe that someone who is 28 can say they have been part of the same profession for 20 years!

The headliners this year met the high standards the fest has set for itself over the past 50 years.  Iconic legends Van Morrison, Diana Ross, Chaka Khan, Gladys Knight and The O’Jays did not disappoint the tens of thousands of fans that molded into one mass spectacle of humanity in front of their stages.  Country music star Chris Stapleton, The Dave Matthews Band, John Fogerty and Jimmy Buffett looked out over massive crowds that savored every note of every song.

Many things distinguish the New Orleans Jazz and Heritage Festival, but the one distinction most noteworthy is the challenge performers have of entertaining and satisfying an audience without their extravagant shows with lights and props.  At Jazz Fest, it’s just the raw talent of the performers and the audience.  That is one reason it would have been so special if The Rolling Stones had performed.  Mick, Keith, Charlie and Ronnie performing in daylight without the lights or the distraction of a big stage show would have been an amazing moment for The Stones and their fans.

But Katy Perry, who was not on tour and did Jazz Fest as a stand- alone event, did something that I have never seen.  Maybe others have done it and I missed their performances, but Katy Perry had as close to a full stage production as I have seen at the fest.  A pink backdrop with pink panels covering stage right and stage left and pink steps that added dimension to Perry, and her dancers gave the luster of a full stage show.  With the exception of lights, which would prove moot during a show in the sunshine, Katy Perry put on a full stage production.  A Jazz Fest first for me.

Jimmy Buffett, who is from the Gulf Coast region, has always been a big fan for the New Orleans Saints and to make a statement about the famous “no-call” that led to the Rams, not the Saints, getting into the Super Bowl this year, Buffett, came out wearing an NFL official’s uniform and was led by Saintsations acting as his seeing-eye dogs.  Always an adopted New Orleans native, that opening further endeared Buffett to the city and the region.

RELATED: Look what Jimmy Buffett did! Saints fans will love this...

Fred LeBlanc, drummer and energized front man for the band Cowboy Mouth, plays Jazz Fest every year.  Cowboy Mouth was set to open the day of music that would lead to The Rolling Stones performance.  I asked Fred for his perspective on the 50th anniversary of Jazz Fest following the disappointment over the cancellation of The Stones:

The conventional thinking was that The Stones cancellation would put a huge damper over the entire event, but surprisingly that exact opposite happened in spite of all the obstacles the festival itself had to endure.  Jazz Fest showed a very strong and resilience when faced with what would seem to be unbearable odds.  I personally equate it to when the Saints were blatantly cheated out of the Super Bowl earlier this year by an obviously questionable call on the referees’ part.  The response of New Orleans was to put on one of the greatest parties the city has ever seen while everybody else around the country was watching yet another episode of the “Who Gets To Be Tom Brady’s Bitch This Year.”  I guarantee you we had a lot more fun here than anybody did in Atlanta that day.
The same can be said of Jazz Fest’s 50th:  Instead of being knocked down by some potentially tough breaks, the festival and the city responded like we always do when faced with adversity - falling back on what makes New Orleans great – our music, culture and our almost obstinate desire to pursue a good time at almost any cost.  The spirit of both the festival, and the city that hosts it, remain strong!”

We do have a way of putting our best foot forward regardless of the challenges we face.  And it has been wonderful to witness so many people coming from across the country and around the world to make New Orleans a destination during Jazz Fest.

Maybe the 50th anniversary of the New Orleans Jazz and Heritage Fest was special because we proved that we know how to party and have fun even when everything doesn’t go our way!

RELATED: Diana Ross not happy with treatment in New Orleans