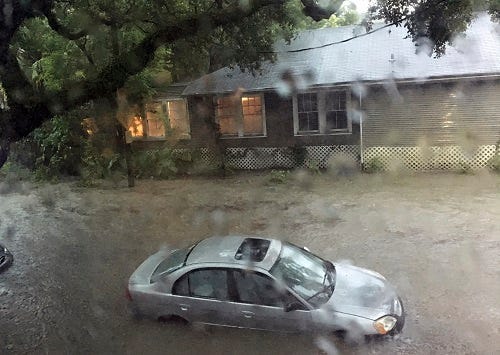 The sudden, massive rain that hit the New Orleans area this morning is just a reminder that there are some things that we cannot control or even predict.

As the city of New Orleans was preparing for the effects of a weather system that moved into the Gulf of Mexico and is expected to grow into a Category 1 hurricane by the time it hits the Louisiana coast, a totally unexpected storm dumped up to 8 inches of rain over a 3-hour period.

The Sewage & Water Board in New Orleans has given us countless reasons to assume their incompetence is to blame every time it floods, but no system could deal with that much rain over that short a period of time. The intense flooding in downtown New Orleans did recede when the rain ended giving the impression that the pumps were working at capacity, but the question of why flooding his happening so often lingers.

Frustrated citizens called my radio talk show today, and some had interesting observations as to why we are flooding more often and in areas that have not been prone to flooding. Historically, downtown New Orleans and the French Quarter have not flooded. Neither area suffered significant flooding during Hurricane Katrina. So why are these areas, along with other areas, suddenly prone to flooding?

One popular reason is the fact that the city continues to grow, leading to more concrete than ever; and there is simply less ground available to absorb the rain water. Others suggest it is the antiquated drainage system in New Orleans, which has been allowed to deteriorate over decades and is now in desperate need of repair and replacement. Another issue is self-inflicted by the people of New Orleans – there is too much litter on our streets and sidewalks which ends up clogging the drains. I was born in New Orleans, and I am very sensitive to the city’s litter problem. I’m not sure when it started, but over time littering has become a recreational activity. Having lived in other cities, I know how clean a city can be; and New Orleans is a littered mess. But littering is acceptable to many people, and I don’t expect that mentality to change.

We have become a society with such advanced technology, and we control so many aspects of life that could once never be controlled. But we are reminded that there are some things we can’t control.

The severe flooding we experienced in New Orleans today may be the result of a combination of everything mentioned – but there is one inescapable factor – Mother Nature can be a B..CH!