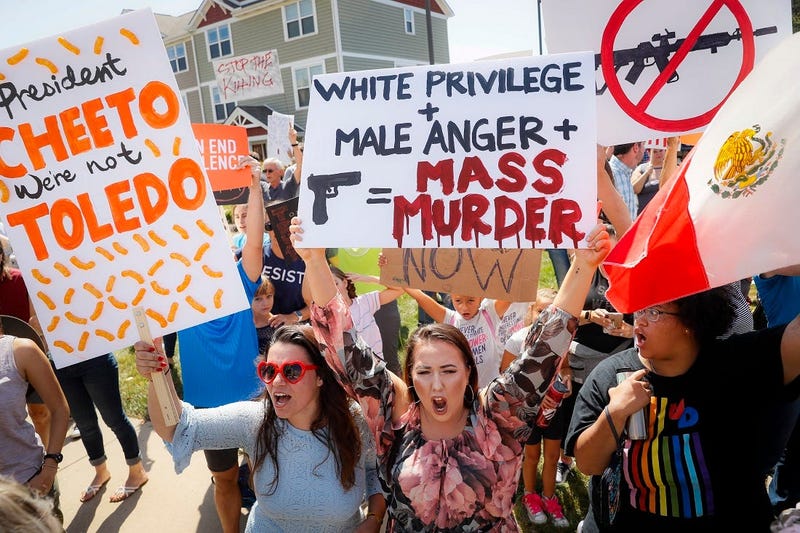 As the President of the United States prepared to visit two American cities that were the scene of mass shootings that killed 31 people and injured over 50 within a 13-hour period over the weekend, protesters were planning to meet the president to send their message that they disagree with his political rhetoric and that they want something done to better control guns in America.

President Trump was greeted by protesters when he landed in Dayton, Ohio, the setting of one of the tragic mass shootings over the weekend. A couple of hundred protesters stood at the Dayton-area hospital where the President and First Lady Melania arrived to visit some of the victims of the shooting. Some of the protesters expressed the view that Trump was not welcome in their city.

More passionate protests are planned when the President and the First Lady land in El Paso, Texas this afternoon.  U.S. Rep. Veronica Escobar (D) is refusing to meet with President Trump during his visit to her city, and she is endorsing the protests against the President.

Every time there is a tragic mass shooting, this weekend included, both sides play their political games. Talk of gun control and gun rights have become a given in the shadow of tragedies. Isn’t it sad that BOTH sides instinctively react by pushing their political agendas?

After the shootings in El Paso and Dayton, there was anticipation that President Trump would use these tragic events to advance his political rhetoric. In an address to the nation Monday, President Trump delivered a speech in which he denounced white supremacy and said there is no room for “hate” in America. We will know soon if President Trump just spoke those words or if he is sincere about acting on those words.

But if one side says President Trump should not play politics with a tragedy – then shouldn’t that side follow its own request?

This may not be popular, but it is worthy of a conversation. If President Trump is asked not to make the mass shootings a political issue – should there be no protests of the President’s visits?

Of course, anyone has the right to protest – but I find hypocrisy in asking the President not to make the tragedies political if protests are making the issue political.

Should there be a truce? I realize that’s a ridiculous question in the political world in which we live today, but it’s a fair question.

Protests are innately political. Protesting President Trump takes advantage of a tragedy to promote an agenda. Don’t expect this to happen – but wouldn’t it be nice if both sides agreed to not use the deaths of innocent people in their vicious game of politics?

sports
Jimmy Butler lost more than 12 pounds in a week during bout with coronavirus: report
sports
Report: Deshaun Watson has requested a trade from Houston Texans
sports
Deshaun Watson landing spots: Which teams could pursue Texans QB?
sports
Joel Embiid on LeBron's flagrant: 'if it was me, I would have probably been ejected'
1thing
5 tips to maintain zero-waste goals during the pandemic
sports
Cowher: Big Ben 'absolutely needs to play' for Steelers next season