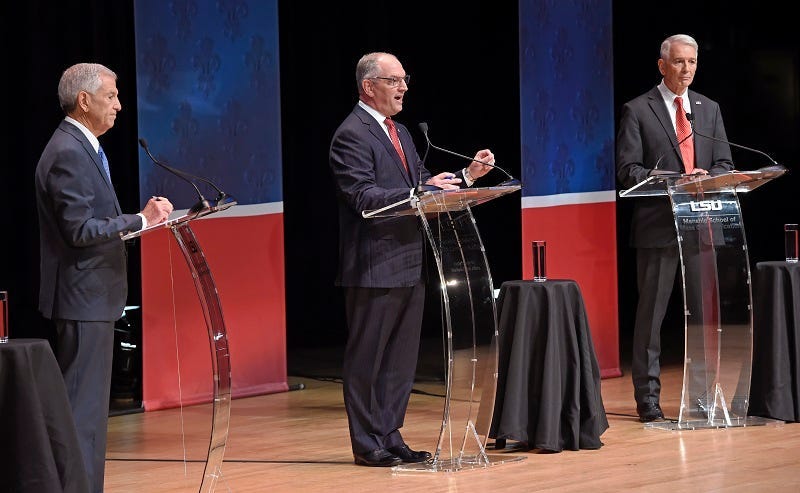 The anticipated run-off between incumbent Governor John Bel Edwards – a Democrat – and Republican challenger businessman Eddie Rispone will seem more like a full-contact spectator’s sport than an election.

President Trump came to Louisiana late last week to campaign for both of the Republican challengers without endorsing either Rispone or Abraham. That, along with much of the talk about the election, set a tone of importance for replacing Governor Edwards – a Democrat – with a Republican – and it didn’t matter which Republican.

On my radio talk show – I talked a lot about the tone of “party over people” and that voting for a Republican just because he is a Republican is the wrong reason to vote for a candidate. There are people who do believe either Rispone or Abraham are the best candidates, but there was no question about the emphasis placed on getting a Republican in the Governor’s mansion. Louisiana is currently the only state in the Deep South with a governor who is a Democrat and it is as if that is embarrassing to the Republican Party.

Chances are very good President Trump will return to Louisiana to campaign for and endorse Republican Eddie Rispone. Rispone’s campaign was based more on siding with President Trump and less on specifics of what he would do as governor and how he would get it done.

If political tribalism is a strong as I believe it is – Governor John Bell Edwards should be concerned about the voters that will vote for Rispone only because he is a Republican and not the best person for the job.

If you add the percentage of the votes for the two Republican candidates it adds up to 51% to Governor Edwards’ 46.6%. But there is a question about whether all of the people who voted for Abraham will vote for Rispone.

After the election, President Trump said Edwards has been a terrible governor, which is nearly impossible to justify. Certainly, not everyone agrees with everything Edwards has done as governor, but following Republican Governor Bobby Jindal it is wrong to depict Edwards as a bad governor. And for those who are currently making the argument that “Louisiana needs a Republican governor” – let’s resurrect what a disaster Jindal was as governor – proving that just because a candidate is a Republican does not automatically mean they are the best person for the job.

From now until the run-off on November 16, Rispone should do more to position himself as a candidate qualified to be governor because of realistic goals and not because he stands with President Trump.

There is little doubt this run-off will be a vicious tribal political war that will attract national attention and money. Many Republicans will argue that if Rispone wins – it will be a statement about the country’s desire to move right. If Edwards wins – many Democrats will say that it is an anti-Trump statement. But neither may be true.

Governor Edwards is a Democrat who is pro-life, pro-gun rights and signed one of the strictest abortion laws in the nation that will be challenged at the level of the Supreme Court.

The challenge for Edwards is the accent his moderate Democrat position and be careful about attacking Rispone for his link to President Trump. Edwards is in a precarious position because Rispone is most vulnerable because of his link to Trump over experience, but Edwards needs the many Republicans who are Trump supporters and voted for him the first time to vote for him again. Bashing Trump and Rispone would not be the best strategy.

What we have is Louisiana a political drama that will attract the most national attention since Edwin Edwards ran against KKK leader David Duke in the early 90s.

It should be fun to watch!