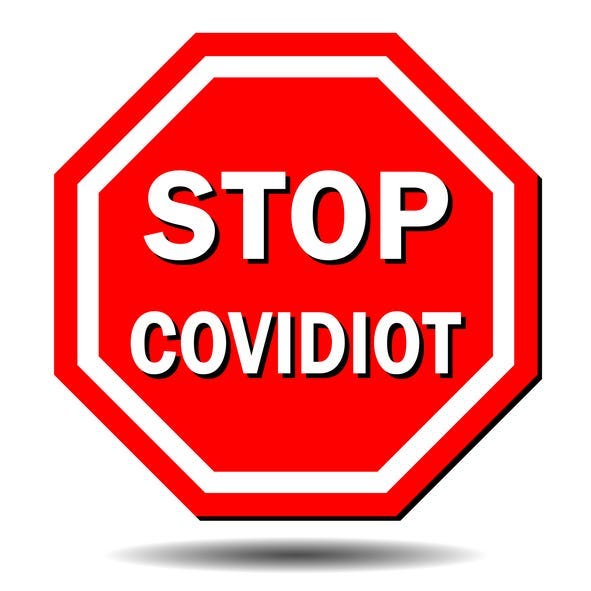 [Warning: DO NOT take this too seriously]

The label of "covidiot" lies in the eyes of the beholder. A covidiot to one person is a patriotic American to another person. Judging anyone a covidiot is subjective - but there may be some general criteria to follow in determining whether some deserves the title of being a covidiot.

To wear - or not to wear - a mask has erupted into a full-blown political debate. The general consensus is that the right is more likely to proudly go out in public places without as mask - while the left is more likely to support wearing a mask in public places. Enhancing the debate over whether to wear a mask or not is the confusing information that supports either decision. If you don’t want to wear a mask - you can find doctors and studies that show it is ineffective in slowing the spread of COVID-19. But if you want to wear a mask and think everyone should - there is overwhelming evidence that wearing a mask effectively slows the spread of the disease.

The pro-mask wearers and the anti-mask wearers will find the evidence that confirms their position - so let’s say the real covidiots are those individuals that shame another person for wearing or not wearing a mask.

On the important topic of social distancing - again - there seems to be indisputable evidence that practicing social distancing does slow the spread of the coronavirus - but that will not change the minds of those who think it is just poppycock. So, let us label the covidiot as those individuals who refuse to respect those who are striving to practice social distancing in all public settings.

If you cough or sneeze and don’t cover your mouth - you are not necessarily a covidiot - you are just an idiot!

As I write this blog I am looking out of the window of my downtown New Orleans apartment, and I see an American flag waving in a slight breeze. As I look at our flag - I wonder who the flag really represents.

Our country is so divided that we do not even bear a resemblance to the America after we became involved in World War II. Then - our country pulled together as one and showed an unprecedented collective resolve to defeat a common enemy.

Today - we are deeply divided over how to defeat a new common enemy - COVID-19.

It will not happen - but it would be nice if we looked at each other - wearing or not wearing masks - and realized that we are Americans first and that we should have enough respect for all that our flag stands for to make our decisions with the understanding that not everyone feels or thinks the same way.

And for those who view the battle to defeat the coronavirus through the prism of their political ideology - at least have enough respect for another person’s freedom to decide what is best for them as part of an intrinsic American right.

Let’s reserve the term “covidiot” for those who fail to respect what are essential American rights.