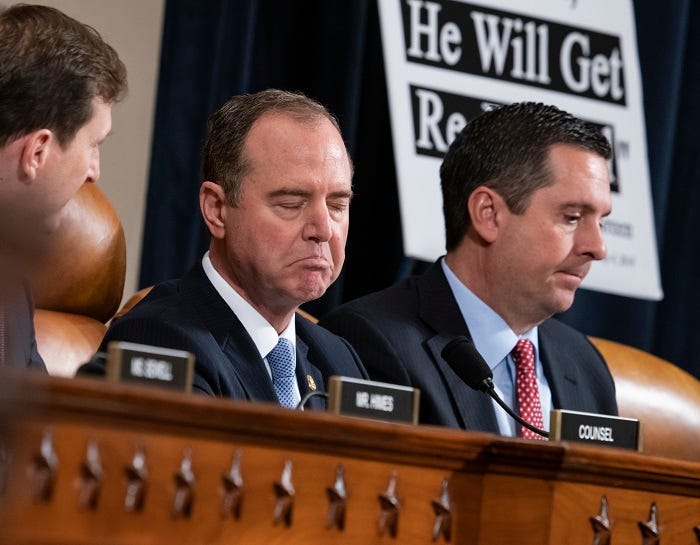 It is important to take seriously the moment our nation reaches a point when impeachment proceedings against a sitting president begin. But the first day of the impeachment hearings against President Trump can best be described as a s*** show.

The two witnesses, diplomats William Taylor and George Kent, were very credible in what they told the committee about President Trump using the office of the presidency to attack a potential political opponent, former Vice President Joe Biden. But the arguments Republicans made about hearsay had merit. Both sides had enough to declare victory after the first day of testimony.

The truth of what really transpired in that “perfect” phone call between President Trump and President Zelensky of Ukraine is important, but protecting political territory seems to trump everything.

The Republicans on the committee are not seeking the truth – they are launching a strong defense of President Trump, regardless of what really happened. The Democrats on the committee appear to care more about winning the right to go into the 2020 election year with the label that “President Trump was impeached.” It’s sad to say, but in the end it is nothing but political posturing.

IF - the President of the United States did use the office of the presidency and taxpayers’ dollars for personal political gain – he should be punished. IF – the Democrats are more interested in winning a political advantage over Republicans – then they should be exposed.

Democrats accused President Trump and his campaign of working with the Russians to defeat Hillary Clinton in 2016. The Mueller investigation found that the Trump campaign did have an inappropriate relationship with Russia during the campaign, but not enough of one to warrant charging President Trump. Again, both sides got just enough political ammunition to declare victory.

Now, Republicans are promoting the idea that Democrats are on a witch hunt against Trump, saying they are just looking for ways to discredit or unseat the President. The fact that the Mueller Report was inconclusive is inconsequential to the idea that President Trump may have used his office for personal political gain. Because an individual is found not guilty of one crime does not exonerate them from the possibility that future crimes may be committed.

Americans are quick to blame the news media or the politicians – but both the media and the politicians reflect the people. As I write this blog – wall-to-wall coverage of the impeachment hearings on the three primary cable news networks – Fox News, CNN and MSNBC – has been preempted by wall-to-wall coverage of a school shooting in Southern California. The cable news networks had planned to analyze the first day of testimony over and over and over using talking heads that support the political leanings of the networks; but, suddenly, that became less important than coverage of the unfolding drama of another school shooting.

I am not suggesting that it is a mistake to cover the school shooting, but I am reminding us all that the news reflects what the decision-makers believe is the most compelling content and not the content that may be most important to us as a country.

Having said that, the impeachment hearings are setting up to be nothing more than both sides trying to win at the game of politics.

What should matter most to the American people and the politicians that represent them in Washington is the truth – what really happened, but that truth is a casualty of an ongoing s*** show.