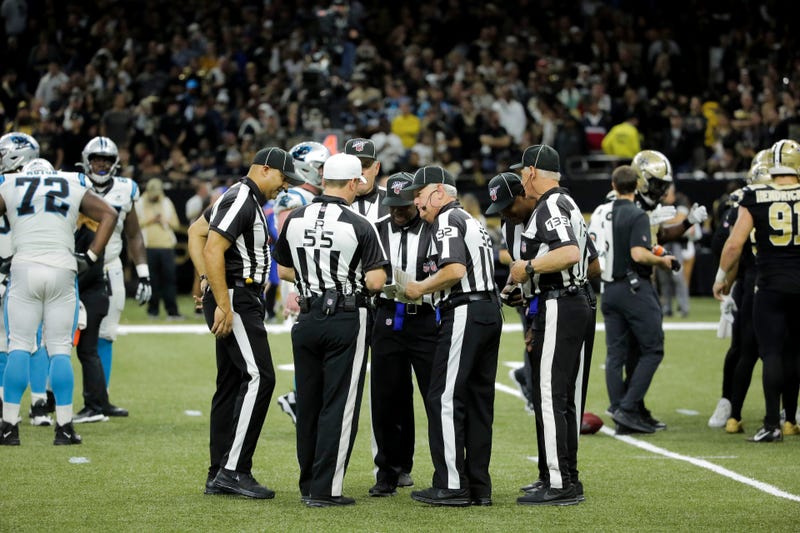 Before addressing the biased officiating in the NFL, let’s first acknowledge that a “win is a win” in the NFL and that the Saints beat the Panthers 34-31 Sunday in the Mercedes-Benz Superdome.

When the Saints jumped out to a 14-0 lead in the 1st quarter, we were all excited because the Saints have not been known for scoring touchdowns in 1st quarter. The Saints seemed on top of their game.

What happened? Late in the 3rd quarter the Saints led the Panthers 31-18, but the Panthers tied it up 31-31 in the 4th quarter. Penalties and a few important underthrown long passes by Drew Brees, and the game was tied. That sinking feeling Saints fans have too often felt began to set in.

The mental and emotional part of football is a key to winning – or losing – games not all sports “experts” consider. Historically, the Saints have had a history of playing to the level of their competition, as they did a couple weeks ago against the Falcons. The Saints have also had a history of jumping out to a lead and appearing to rest on what they had accomplished. This is not a conscious process, but fans can’t help but get the sense that the Saints rarely possess a killer instinct, that instinct to finish off teams.

The good news is that the Saints do have that killer instinct when they need it most. With the game tied at 31-31 and with a lot of help from Panthers’ placekicker Joey Slye, who missed 2 extra points and a 4th quarter field goal attempt that would have put the Panthers ahead.

With under 2:00 left in the game – the Saints were deep in their own territory – and then the killer instinct kicked in and Drew Brees and the Saints marched down the field with surgical precision to put Will Lutz in a position to kick the winning field goal with :03 left in the game.

My point is – the Saints do have a killer instinct, but it is used to pull off desperate wins late in a game rather than used to put teams away. If the Saints do that every time – great – but I don’t think the Saints will always get away with that against better teams, like the 49ers, and teams the Saints would meet in the playoffs.

The other part of the game that must be addressed is the officiating.

Several times calls that benefited the Panthers were so obviously driven by complete incompetence or a subconscious bias that fans began chanting, “Refs you suck!” And the refs did suck!

The evidence seems to be mounting that officiating in the NFL has become less accurate, and the most obvious mistakes seem to fit a game-time narrative – like the home team or any team playing the Saints gets the benefit of calls that could have gone either way.

Later in the game, there was a no-call against the Saints and Panthers’ coach Rivera challenged the no-call and it was overturned and that gave the Panthers 1st and goal on the 3-yard-line. The Saints defense rose to the occasion and forced the Panthers to settle for a field goal attempt, which their kicker missed. And that’s when Brees and the boys went to work and drove down the field to put Lutz in a position to kick the winning field goal.

Maybe the conversation about impeachment should include some of the NFL officials. And it’s not just the Saints. In the Cowboys – Patriots game in New England - there were a few calls that could have gone either way but went in favor of the Patriots. Again – that seems like officials are allowing their decision to be guided by a bias that fits the compelling narrative at the time and the Patriots beating the Cowboys at home was the obvious narrative.

I’m not sure what can be done to hold officials more accountable for their calls, but the least we can do as fans is to continue to bash the league for allowing such incompetence – or such bias – to determine the outcome of games.

I have often thought about why there seems to be a consistent bias against the Saints when it comes to officiating, and the only solid reason I can come up with is everyone is jealous because we live here and they don’t!