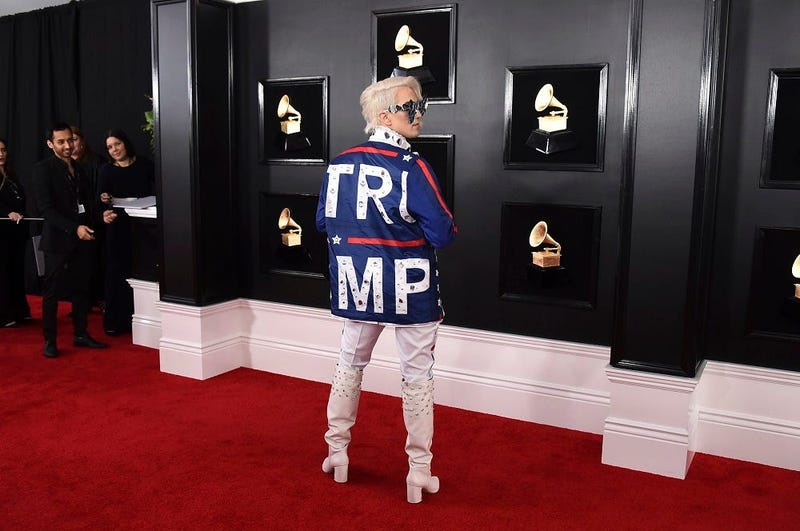 At last night’s Grammy Awards from the Staples Center in Los Angeles, there were a few surprises; but nothing was a bigger surprise than the absence of Trump-bashing.  However, there were a couple of pro-Trump moments on the red carpet before the show.

Joy Villa wore a dress with a barbed wire design and written boldly on the back of the dress were the words, “Build The Wall.”  Villa also carried a MAGA bag and said she believed in the President and her new album, “Home Sweet Home,” expresses her love for American.  Also on the red carpet, glam-rocker Ricky Rebel wore a jacket with “Keep America Great” and “Trump 2020.”  Rebel wore white high-heeled knee boots which reflected his open bisexuality.  Rebel is also a strong advocate for LGBTQ rights, which makes him a less likely Trump supporter.  The entertainment media, so often condemned for being anti-Trump and anti-Republican, could easily have avoided showing the pro-Trump support on the red carpet, but chose to give it full attention.
Country artist Kacey Musgraves was four Grammys and was a surprise winner of Best Album of the Year for “Golden Hour.” Musgraves dominated the country categories including winning awards for Best Country Song and Best Country Solo Performance.
Childish Gambino, who did not attend, made history by becoming the first rap artist to win Song of the Year and Record of the Year for his politically-driven song, “This Is America.”  The video for the song also won a Grammy for direction of the Best Music Video.

Live on my Facebook page - Scoot On The Air - I was commenting on winners and performers during the Grammys and the amazing performance by Janelle Monae inspired comparisons to both Prince and Michael Jackson.  Cardi B became the first woman to win a Grammy for Best Rap Album, and her endless rambling about being pregnancy and doing her video only ended when producers cranked up the cue music.

Congratulations to PJ Morton, who is from New Orleans.  Morton, keyboard player for supergroup Maroon 5, won a Grammy for his unique cover of The Bee Gees hit, “How Deep Is Your Love.”

The Smokey Robinson-led tribute to Motown was memorable; and I was impressed with young artist H.E.R., who won a Grammy for Best R&B Album.  The acknowledgment of Aretha Franklin was touching and a great promotion for an upcoming special on the Queen of Soul.

While I can honestly say that much of the music performed and many of the winners are not from my favorite musical genres, the presentation of the Grammy Awards was entertaining; but the positive moments from guests and winners were most noteworthy.

Alicia Keys hosted the Grammy Awards for the first time.  She is beautiful and extremely talented, but I was not impressed with her as host.  Keys banter seemed obsequious; and over time the phrase, “Here’s my sista…” lost its effectiveness when nearly everyone was her “sista.”

Early in the show, Alicia Keys introduced four powerful women - Lady Gaga, Jada Pinkett Smith, Jennifer Lopez and Michelle Obama.  Each woman had meaningful words, and I was surprised that even the former First Lady did not use her platform to bash Trump or make a political statement.  Michelle Obama talked about how “Music helps us share ourselves - our dignity and sorrows, our hopes and joys.  It allows us to hear one another, to invite each other in.”  And was I the only one surprised by how tall Michelle Obama is?  Her height led to the absurd social media speculation that she is actually a man!  Gotta love social media and the trolls who live there.

Lady Gaga’s message was one of believing in yourself and spoke of the people who told her she would never make it for numerous reasons.  She basically said that you should follow what you believe in, regardless of the naysayers.

The highlight of the night for me was the acceptance speech by Drake, who won a Grammy for his rap song, “God’s Plan.”  There was some controversy about Drake’s speech, and many on social media believe he was cut off by the producers of the show because his speech seemed to throw shade on The Grammys.  I didn’t interpret it that way, and I thought Drake’s acceptance speech was very positive and had simply gone on to the point where it was time to wrap up.
Drake had this message in his acceptance speech last night:  “the kids watching, those aspiring to do music, and all my peers that make music from their heart, that do things pure and tell the truth” to “know we play in an opinion-based sport, not a factual-based sport. It is not the NBA… This is a business where sometimes it is up to a bunch of people that might not understand what a mixed race kid from Canada has to say… or a brother from Houston right there, my brother Travis. You’ve already won if you have people who are singing your songs word for word, if you are a hero in your hometown. If there is people who have regular jobs who are coming out in the rain, in the snow, spending their hard-earned money to buy tickets to come to your shows, you don’t need this right here, I promise you, you already won.”

The absence of anti-Trump rhetoric and political statements at The 2019 Grammy Awards either means that awards shows have gotten the message that American audiences are tuning out of awards show because of the politics, or the awards shows realize that the saturation of political talk and debate throughout society has reached the point where using an entertainment venue to promote political ideology is depleting audience size.  Which do you think it is?