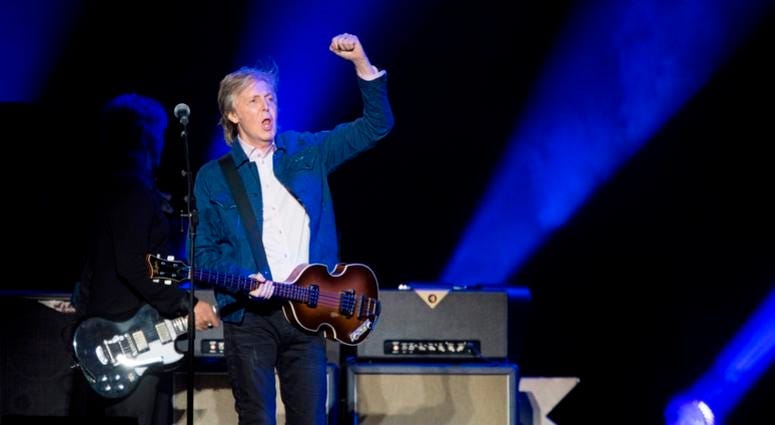 Paul McCartney opened his 2019 North American tour in the Smoothie King Center in New Orleans, LA last night.  For many in the sold-out arena it was more of a religious experience than a concert.  At 76, Paul McCartney’s energy and stamina were noteworthy and it is fair to say that Sir Paul does not act his age.

Prior to McCartney’s entrance, the naked stage gave a hint that this was not to be a concert dominated by lights and visual effects.  The tiered stage was black and simplistic and set the tone that this night would be a night where the essence of Paul McCartney was the show.

His slender 5’11” frame walked onto the stage with his band following him in a nonchalant fashion that defied his position at the top of rock royalty.  A relaxed confidence defined his presence and movements back and forth from the front of the stage to the black grand piano on a raised level at stage left.

Paul McCartney came out dressed in black skinny jeans, a light pink button-down shirt and a blue jacket.  After the first few songs, Sir Paul removed his jacket and that inspired the audience to applaud.  He gestured the audience as if to say, “Hey, I’m just taking off my jacket this is not a big deal.”  McCartney did say that would be the only wardrobe change in the entire show and he lived up to that promise.  His outfit was casual and while the decision of what to wear was probably a calculated choice, the simplicity added to this being a night of the seance of Paul McCartney.  His band was dressed in all black and blended into the staging landscape.

Sir Paul is setting the standard for what it means to embrace the natural process of maturing.  His hair is gray and his face has maintained the characteristics of the young Paul McCartney we were introduced to in 1964.  He still has the expressive eyes that seem to say something even when he is not talking or singing, and he appears to have matured to 76-years-old without the aid of Botox or facial surgery.  Last night, Paul McCartney personified the best of the young, rebellious generation that fueled The Beatles and the British Invasion over 50 years ago.  Sir Paul’s voice, his appearance and his stage presence gave Baby Boomers and every generation permission to get older with the knowledge that you never have to lose who you really are.

The show opened with Sir Paul walking onto the stage and gesturing to the audience before stepping to the center mic and stroking the all-too familiar chords of “A Hard Day’s Night.”  The audience’s response was explosive.  By opening with one of the early 1964 hits by the Beatles, McCartney let everyone know that he was not the snobbish entertainer who wants more focus on their solo career than the career with a group that launched them into stardom.

I admit that I was surprised the second song McCartney played was “Junior’s Farm,” a single from a Nashville-inspired album that wouldn’t have been missed, if it did not make the set list.  But at least he played it early in the set.  Following “Junior’s Farm” Sir Paul did “Can’t Buy Me Love,” another Beatles hit from 1964.  The brass section first appeared during that song and they were not on stage with the rest of the band - the brass section appeared out of the portal of Section 112.  The spotlight focused on the norms being among the crowd.

It should be no surprise that the show was tight, but also had a feel of being spontaneous.  Paul McCartney epitomized earned confidence, but he was also quirky with his moves and gestures and there was no doubt that Sir Paul genuinely loved the audience and the moment.

Actual videos and pictures draped the backdrop of the stage and the animation ranged from modern to Yellow Submarine/Sgt. Pepper-inspired. Two tall rectangular video screens bordered each side of the stage providing close-ups of Paul and his band.  The sound in the Smoothie King Center was exceptional and, in particular, the drums were mic-ed for sound in a way that made your body physically feel the drummer rolling through the tom-toms.

With a mix of classic Beatles songs to McCartney solo classics to appealing songs from his new album, Sir Paul was on stage performing for nearly 3 hours.  Since this was the first show of the new tour, it was impressive to witness a show that was tight, but yet, seemed natural and unrehearsed.  McCartney and his band of excellent musicians were in constant communication with each other as the inaugural show unfolded.

Sir Paul referenced John Lennon and after performing “Something,” acknowledged George Harrison.  Most impressive was the way McCartney expressed love for both, while maintaining a positive attitude about life and the role both played in his life.

In addition to being confident, relaxed and quirky on stage, a very peaceful vibe emanated from Sir Paul throughout the night.  At one point, he talked about a new song he had written about bullying and how wrong it is to bully and that we all have a responsibility to stand up and denounce the bullies.  After performing a song he wrote for John after his death, Sir Paul made a point of saying, “If you want to say something nice to someone - say it - don’t put it off.”

Singer-songwriter rock/country/Cajun fiddler Amanda Shaw went to the concert with me and after she commented, “It was AMAZING.  It gave me so much life to see such a legend at his age still killing it, being genuine and truly loving his art.  Plus - he is the king of rock n roll!”

At one point in the concert, the musician in Amanda led her to make that observation that there were only five musicians on stage “making that much music and he’s for real.  It’s not just about the money.  I just feels like you know him.”

Perhaps the most memorable thing about the concert was Sir Paul himself.  He did make you feel like he loved what he was doing and sincerely appreciated the audience.  And in a sold-out arena it is a challenge to connect with an audience.  Sir Paul McCartney took moments to relate stories and how he was feeling being on that stage.

The concert ended with “Hey, Jude,” but you knew an encore would follow.  The encore was “Birthday,” “Sgt. Pepper’s Lonely Hearts Club Band,” “Helter Skelter” and finally “Carry that Weight.”

At 76, Paul McCartney gave comfort to the process of getting older without losing your spirit or desire to let the rock live forever.  And right before Sir Paul left the stage for the last time - he said something very comforting - he said goodbye until “next time!”  And the way Sir Paul looked and acted - we have every reason to believe there will be a next time!