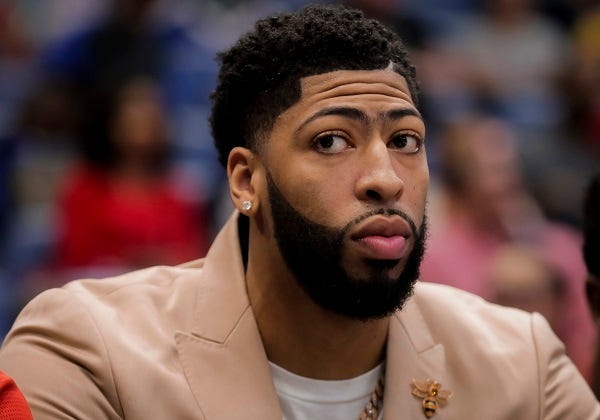 It’s fair to say the New Orleans Pelicans are “lucky!” With only a 6% chance of winning the #1 pick in the NBA’s draft lottery, last night, the Pelicans won the #1 draft choice again!

In 2012, New Orleans also won the draft lottery and selected Anthony Davis. I could only wonder how Davis felt last night when the Pels won the #1 selection again, with another chance of getting a player who could have an instant impact on the team. That player is Duke’s phenomenal forward Zion Williamson. Zion is big and physical but also very quick and agile. Can you imagine an NBA team with AD and Zion?

When the NBA draft is held next month and if, as expected, Zion Williamson is the Pelicans’ choice, the team will have both AD and Zion.  But remember that AD announced before the end of last season that he wanted to be traded and was no longer interested in playing for the Pelicans. The question is: Does Anthony Davis still want to be traded?

The desire to put his talent on display in a major market is something that most professional athletes consider, and that was certainly on AD’s mind when rumors circulated that he wanted to be traded to the L.A. Lakers to team up with LeBron James. There are even reports that Zion Williamson was hoping that the N.Y. Knicks would win the #1 draft pick so he could play in New York.

A lot has changed since Anthony Davis insulted New Orleans by his public desire to be traded away from the Pelicans. But things were different when Davis vented his frustration about playing in New Orleans.

The Pelicans now have a top-flight general manager in David Griffin, who was the successful GM of the Cleveland Caveliers when they were on top. The hiring of Griffin demonstrates that Gayle Benson and the organization are serious about creating a championship NBA team here. With talented new guidance in the front office and now with the luck of winning the #1 draft pick in the upcoming draft, suddenly the New Orleans Pelicans are a hot, trending franchise. So how is AD feeling today about his decision to leave New Orleans?

With the prospect of drafting the talented Zion Williamson next month and having David Griffin as GM, there is intense buzz around the Pelicans. This would be unprecedented, but what if Zion does not want to play for the Pelicans for the same reason Anthony Davis wants to be traded? The benefits of top athletes playing in top tier markets are significant. But with the right to draft Zion Williamson and with the rights to Anthony Davis, even if neither of those players ended up on the Pelicans’ roster - the team will end up with a wealth of talent.

With David Griffin in the front office, it is difficult to image that Zion Williamson will not want to play in New Orleans and there may be a slight possibility that AD will want to stay. But that leads to another important issue. Anthony Davis’ public request to get the hell out of New Orleans.

There’s a lesson to be learned from the mistake Anthony Davis made as a young player. By announcing that he wants out of New Orleans before the season ended, Davis is no longer a beloved sports figure in the city. The fans’ reaction to Davis’ request is justified.

So, at this point, how could Anthony Davis stay in New Orleans? Would the city forgive and forget in the interest of having AD and Zion on the same team? I’m not sure that is in the DNA of New Orleans sports fans, who might not be able to put bitterness aside - even if it means have two of the top players in the league.