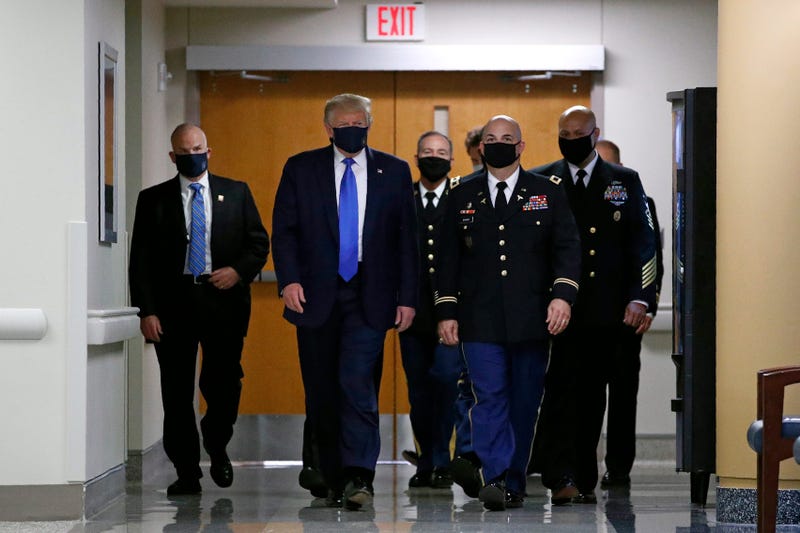 The rejection of reality by President Trump and Florida Governor Ron DeSantis has now reached the point of being another cluster-Trump.

President Trump retweeted a tweet from former game show host Chuck Woolery which attacked the CDC for lying about the coronavirus in America.

The most outrageous lies are the ones about Covid 19. Everyone is lying. The CDC, Media, Democrats, our Doctors, not all but most ,that we are told to trust. I think it's all about the election and keeping the economy from coming back, which is about the election. I'm sick of it.

The President took time to reject the claim that the virus is spreading rapidly, a claim made by Dr. Anthony Fauci - the infectious disease specialist on the White House Coronavirus Task Force. There is a lot of confusion among Americans about COVID-19 because there is no cohesive message from the White House.

President Trump changed his staunch position against wearing a mask by wearing a black mask during a visit to wounded service members at Walter Reed Medical Center on Saturday, and I thought the President looked strong and confident.  His willingness to wear a mask in public is a gesture to the idea that wearing a mask is important.

Over the weekend - the state of Florida set the record for the most coronavirus cases in one day with over 15,200 - which topped the single-day record in New York. More than ironic - this should be an embarrassing moment for Republican Governor Ron DeSantis.  On May 22, he condemned the media for even suggesting that Florida could go the way of New York with case increases. DeSantis - a Trump protege - even demanded an apology from the media for comparing the fate of his state of that of New York - which is run by Democrat Andrew Cuomo.

The brazen efforts to open Florida earlier than other states and the flagrant opening of the beaches over the Memorial Day weekend reflected DeSantis turning social distancing and mask-wearing into political issues. Today - Florida is reporting over 12,000 new cases after setting the record for one-day case increases over the weekend.

In May, DeSantis said, “We’ve succeeded and I think that people just don’t want to recognize it because it challenges their narrative.”

DeSantis was wrong, and his politically-driven attitude toward COVID-19 exposes a dangerous denial as the disease continues to rapidly spread in many states - including Louisiana.

Louisiana Governor John Bel Edwards held a rare Saturday press conference to announce that he was signing an executive order for a statewide mask mandate along with the closure of all bars.

It is logically impossible to witness the increases in coronavirus cases following open public gatherings - from beaches to protests - and not realize there appears to be a direct link between ignoring social distancing and mask-wearing mandates and the increases.

President Trump’s decision to wear a mask in public was an obvious admission that the hardcore rejection of wearing a mask is wrong and juvenile.