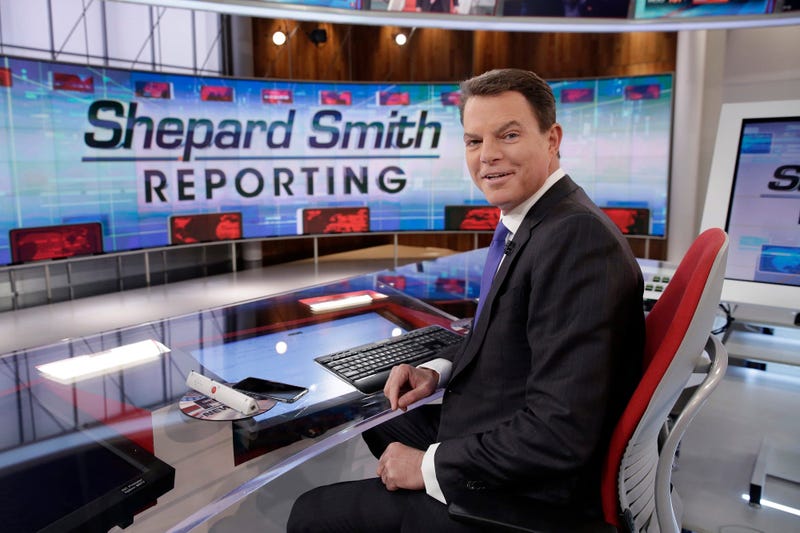 President Trump is not currently building the wall, in spite of his insistence that he is.  The compromise deal that is currently being hammered out in Congress will not provide funding for over 200 miles of wall, but it will provide for 55 miles of a fence.  The President’s claim that wall construction has been underway is simple not true.

That information comes from the on-air fact-checking of Fox News anchor Shepard Smith.  Fox News has the image of promoting and protecting President Trump, but Shepard Smith and a couple of Fox contributors have not followed the overall pro-Trump crusade of the conservative network.

This is not the first time Shepard Smith has fact-checked President Trump, and I’m sure those moments are met with harsh criticism from many loyal Fox News viewers.

If Shepard Smith truthfully contradicts President Trump - should he even be on The Fox News Network?  If you are a Fox News viewer, how do you react when Shepard Smith challenges President Trump?  Should a network only have anchors and contributors that strictly adhere to party lines?  Or does it add credibility and even entertainment value that a network allows free thinking?

This is a much bigger topic that whether Shepard Smith should be on Fox News because he is honest about President Trump and does not shy away from calling out the President when he thinks he is wrong or when he is deceiving Americans.  This is actually a topic about whether a particular political ideology should own each source of the media.

Fox News has the image of being a very conservative network that directs programming and overall content to a conservative audience.  CNN and MSNBC are cable news networks that lean left and in some cases are blatantly liberal.  CNN and MSNBC, like Fox News, target a specific audience with the selection of stories to cover and the presentation of those stories.

I often talk about the dangers of “confirmation bias.”  Confirmation bias is the tendency to seek the media that supports your opinions rather than seek the truth.  I image that many Fox News viewers go crazy when they hear someone like Shepard Smith contradict President Trump by fact-checking the President.  But doesn’t the deviation from a myopic political perspective add value and credibility to a news or broadcast source?

In the last 10 years, the tolerance for opposing views has shrunk to a frightening level.  The idea that viewers and listeners are exposed to opinions that challenge the foundation of their political tribalism is extremely unsettling to many Americans.

Why did we become a nation, one that was built on the basic right of free speech, that seems dominated by people who believe their choice in media sources should only reflect their views?  That seems like a deep insecurity within those who do not want their media polluted with any opposing views.

On WWL-AM-FM-WWL.com, I receive texts, emails and calls expressing great support for what I do; but I also get reaction from some people who believe that I have no right to take a position on the air that contradicts the tenets of strict conservative doctrine.  I also hear that I should not be anything but conservative because I am on the air in a red state.  I find that comical when I realize the Rush Limbaugh began to gain national attention while on the air in a deep blue state.

The idea that all media in a red state should be conservative is beyond absurd.  I receive calls from listeners who totally agree with my views; and they come from St. Tammany Parish, St. Charles Parish, St. John Parish, Jefferson Parish, the West Bank, bayou country, Mississippi and many other areas that hold the image of being the reddest areas of a red state.

The point is there are a lot of people in this red state that are not strict conservatives.  Most of them are independent or moderate registered Republicans or moderate Democrats.  Why should this massive audience not have a voice that reflects their views?  And why should everyone not approach every issue with an open mind?

The mentality that has led to the idea of political ownership of a radio station or a cable news network defies the American spirit.  I often wonder if some Americans are afraid of hearing a different point-of-view because of the possibility that an opposing view might actually make sense to the point where the justification of their existing opinion might cause them to change positions?  And is the changing of a long-held believe or position a personal attack on the individual?

Are some Americans actually afraid of changing their positions in the face of facts because that would be unsettling? The most loyal Trump supporters do not want the truth because the truth might upset what they have convinced themselves is right and too many Americans appear to be clinging to the idea of being right in what they believe even if it means ignoring the truth.