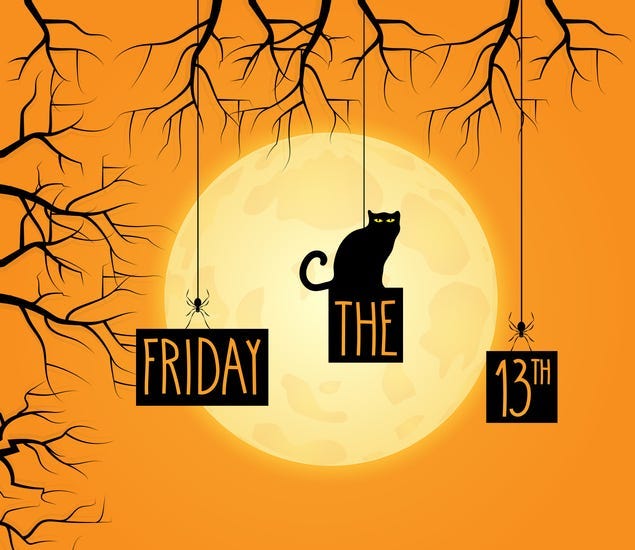 Does anything about today scare you? Today, is Friday the 13th and a full moon! This doesn’t happen often.  In fact, it will not occur again for 30 years.

The belief that Friday the 13th being an unlucky day can be traced back to the painting of the Last Supper. There were 13 people in attendance – Jesus and his 12 disciples. The number 13 was associated with Judas – the betrayer of Christ. Also, the number 12 was considered the perfect number because there were 12 months in a year while 13 was considered an imperfect number.

Reinforcing the notion that it is an unlucky day is that King Philip IV of France arrested hundreds of Knights Templar on Friday the 13th in October of 1307.

So prevalent was the fear of Friday the 13th that science gave it a name – paraskevidekatriaphobia.

The 2 main countries that consider Friday the 13th to be an unlucky day are the United States and the United Kingdom. Air France, Lufthansa, and Ryanair are 3 airlines that do not have a 13th row. Some hotels and building do not have a 13th floor.  The Stress Management Center and Phobia Institute of North Carolina estimates that between $700 and $800 million dollars is lost in the marketplace because people refuse to make decisions on major purchases or travel on Friday the 13th.

In 1993, a study published in the British Medical Journal reported that “Friday the 13th is unlucky for some. The risk of hospital admission resulting from a transport accident may be increased by as much as 52%.” The study recommended that people stay at home.

The perception that a full moon inspires deviant human behavior continues in modern times with reports from law enforcement and hospital emergency room workers that they experience more problems during a full moon, but that perception is not grounded in scientific proof.

The fact that the word “lunatic” is derived from the word “luna” – meaning moon – supports those who want to believe there is a connection between being looney and the moon.

What gives credence to the fear of Friday the 13th and a full moon is “confirmation bias” built on preconceived notions. If you have reason to believe that Friday the 13th or the night of a full moon are indeed unlucky – then anything negative that happens during either event will be credited to the theory that both are bad days.

Any understanding of the laws of attraction would convince you that having a negative attitude only invites negativity. Anyone venturing out on Friday the 13th who believes it is an unlucky day will change their behavior based on that belief. There will be a tendency to actually look for things that confirm that belief. And the same is true for a full moon. There is a tendency to equate any negative behavior on the full moon and not highlight the same behavior on a day when there is no full moon.

The best way to approach any Friday the 13th or any full moon is to have a positive attitude and believe in the science that has yet to find a direct relationship between these events and human behavior.

And there is plenty enough deviant human behavior on any given day to support the idea that Friday the 13th or a full moon are nothing to fear.