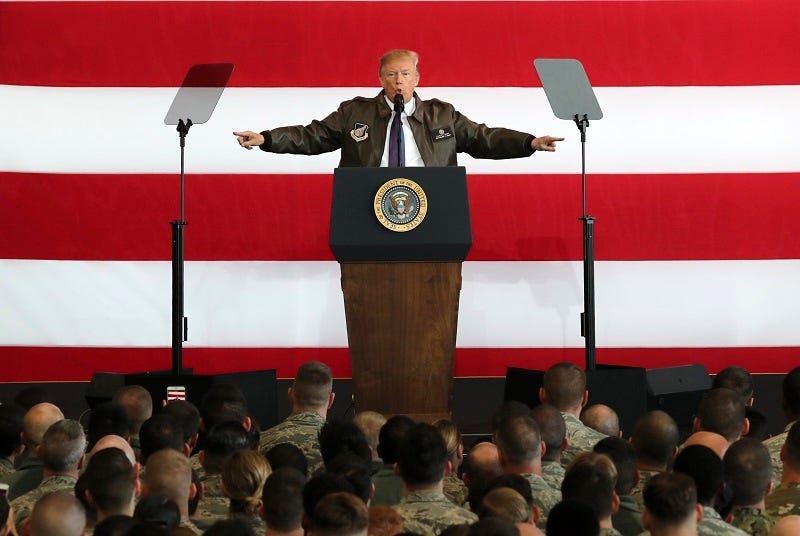 Students that boo President Trump during his appearance at this weekend’s LSU – Alabama game will lose their tickets for future Alabama games!  Wow!

The university’s Student Government Association quickly set the record straight saying that the original message about engaging in “disruptive behavior” was taken out of context.

In a statement, “The SGA strongly affirms its belief in free speech and the rights of all students to express their opinions. Today’s report erroneously assigned a political context to a message meant only to remind students about heightened security as the consequences of altercations or other behaviors unbecoming of a University of Alabama student.”

President Trump announced he would attend the most anticipated game of the season with #1 LSU taking on #2 Alabama in Tuscaloosa Saturday afternoon.  Can you blame him?  A heated rivalry with LSU #1 and Alabama #2!  Plus – the two teams represent two bright red states with strong support for the President.

The University of Alabama is warning students and fans about the extra security that follows any president in a public setting.  Students are being asked to be in their seats “no later than 12:30 pm,” which is two hours prior to the 2:30 pm kick-off.  Imagine Bama fans having two hours in their seats getting ramped up for the game against LSU?  Can you say “flask”?

President Trump was booed while attending Game 5 of the World Series and there were boos and cheers when he attended a UFC fight in New York last week.

It’s normal for a president to get booed in certain situations, and it’s understandable that a warning to students to behave properly might have been mistaken as a warning against even booing President Trump.

There also seems to be a tendency for some members of both political tribes to be overly sensitive when it comes to the freedom to express their support or disdain for the president.  It’s sad that people are looking for ways to declare that they are victims who are being robbed of their right to love or hate President Trump.

While LSU and Alabama are from red states, many of the college students from both schools are not Republicans and do not support President Trump.  So, in this setting of a highly-anticipated game between two bitter rivals – is it wrong for students or fans to boo President Trump?

When Trump administration personnel have been verbally attacked and ridiculed or refused service at a restaurant – I have been quick to defend the individual associated with Trump, saying they should be respected and allowed to enjoy a meal at a restaurant in America.  Not everyone agrees with me.  However, I think the rules of being in public at a sporting event are different.

If this seems hypocritical – so be it – but I will defend a person with known political views who is trying to enjoy at meal at a restaurant.  This is when we should respect someone as being an American first, with the right to dine without being harassed.  But on a public street or at a football game – I think expressing one’s feelings toward a politician or a politically-connected individual is more acceptable.

But even the negative reaction to someone does have rules.  Booing a president on a public street or in a public setting is protected by the First Amendment, but relentless harassment of that person is unacceptable.

Though I support a person’s right to express disapproval of President Trump – or any president – in a public setting – I think we should do a better job of putting politics aside when it comes to things like sporting events.

The civility we have lost in America includes the recognition that politics does not have to be part of everything we do.  The LSU – Alabama game Saturday afternoon should be an incredible battle between two great rivals.

Leave politics out of this great American tradition.