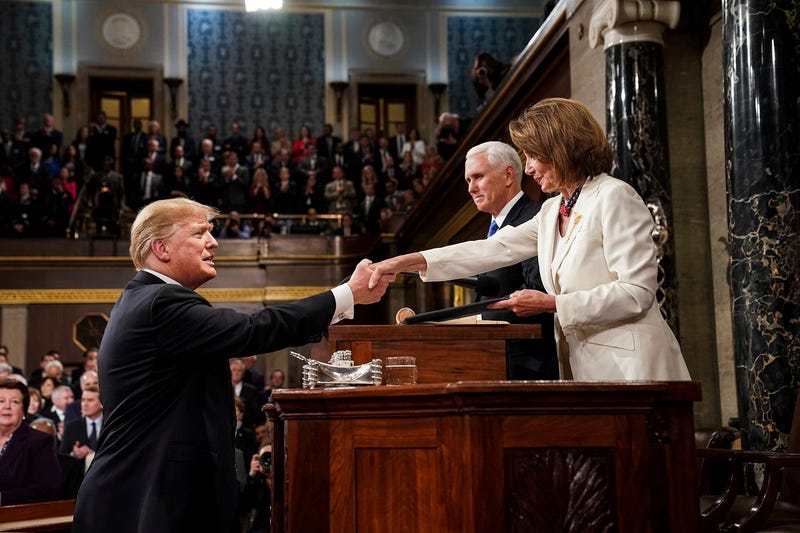 Which one of the President’s three SOTU addresses did you like best?  Was it the speech that called for unity and a vow to work together - not as two parties but as one nation with "an agenda for the American people?"

Or was it the speech that told stories about true American heroes as they stood to standing ovations?  Or was it the speech President Trump delivered to his base that instilled fear that you will be killed by an illegal immigrant, unless we have a wall or the fear that America is on the brink of becoming a socialist nation?

President Trump delivered several distinctively different SOTU addresses before Congress and the nation last night; and if you are a Trump lover or hater, there was a lot to praise or criticize.

In the speech that was meant to unite us, President Trump spoke in definite terms that promised compromise and declared we must “choose between greatness and gridlock.”  In saying that “Victory is not winning for our party - victory is winning for our country,” Trump invited a coming together of all Americans.
Since presidents unfairly get the credit or blame for the economy, President Trump touted a booming economy with job creation and low unemployment, especially for African-Americans, Hispanics, Asians and handicapped Americans.  But as a tag to boasting about his impact on the economy, President Trump warned that one of the only things that will stop a booming economy is “partisan investigations.”
If you decided to play the drinking game of taking a shot every time President Trump said the word “border,” you got very tipsy about half way into the speech.

In his warning about the national security threat to citizens and country poised by illegal immigrants, President Trump did say that he wants immigrants to come to America in the largest numbers - but they must come legally.  Inviting a massive number of even legal immigrants to America may have caused some Republicans to cringe.

There are other moments when the SOTU address sounded more like it was coming from a Democrat than President Trump. The President introduced and honored two African-American ex-convicts, who were recently released from prison, and used that opportunity to speak about the injustice in criminal sentencing.

President Trump also bragged about how 58% of new jobs went to women and that more women are in the workforce and serving in Congress than ever before.  That led to a standing ovation from the section of female lawmakers showing solidarity by all dressing in white.

President Trump uncharacteristically spoke about lower health care and prescription costs and mentioned that we have done so much in the area of preventing HIV and AIDS and that “together we will defeat AIDS.”

Trump said he is the first president to include paid family leave in his budget and talked about the importance of parents being able to bond with their newly born children.

The other speech President Trump delivered last night was filled with fear-mongering from the threat of being killed by an illegal immigrant to the ridiculous notion that, if he had not been elected president, America would be currently engaged in a major war with North Korea.

But the most bizarre attempt to instill fear in Americans came when the President said, “We are alarmed by the new calls for socialism” and vowed that America will never become a socialist nation.  The threat that our nation is headed for total socialism is the fear factor used to frighten Americans into voting for Republicans as the only way to protect democracy.  To use the concept of providing health care for all Americans as a sign that America is about to become a socialist country is beyond absurd, but it is a fear tactic that will resonate with Trump’s base.

The stories about the past and current heroes and their presence in the chamber were powerful moments that inspired bipartisan ovations.  The most extraordinary moment came when President Trump introduced a Holocaust survivor and seated next to him was one of the America soldiers who saved his life.

President Trump took us on a journey of calling for political unity with a promise to do his part to making us fearful for our safety and democracy to an optimistic idea that our best is still to come.

The President is more comfortable ad-libbing than he is reading.  Last night’s speech was a carefully read - and at times - awkward speech, but it was several speeches in one.  Fox News contributor Brit Hume said after the speech that Trump’s speechwriters did a great job.  That’s not a criticism since every president has speechwriters.

Many of the words the President spoke in his SOTU address were positive and comforting, but they remain just words, until President Trump follows through on what he said.