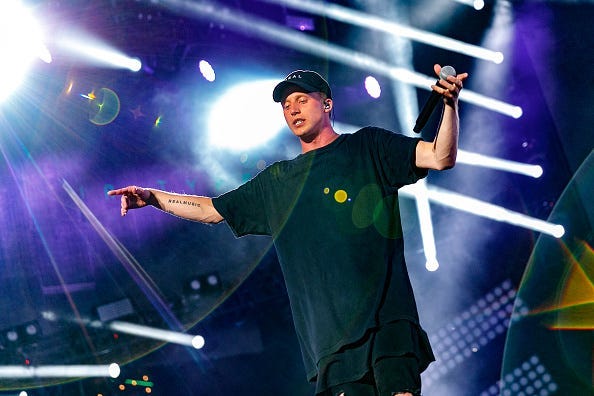 When a rapper, who is a Christian and raps with only clean lyrics, beat out the highly-anticipated new album from Chance The Rapper and hit #1 on the Billboard Hot 200 rap album chart – heads turned.

Nathan Feuerstein, known as NF, is not only a Christian; but he’s also white.  His new rap album, “The Search,” is the #1 rap album on the charts. What made that so notable was the fact that Chance The Rapper had a new rap album coming out at the same time that was expected to dominate the rap music charts.

The fact that NF is white is only significant because it shatters the tradition of black artists dominating rap music, but most interesting is the idea that NF is a Christian.  His clean rap music is #1, and it is an audience that made NF’s The Search #1.

A white Christian rapper being on top of the rap album chart could be a sign of a coming rebellion against the status quo of violent, misogynistic, profanity-laced rap that has ruled the rap roost.

Is a young generation ready to rebel against the rap establishment? Every young generation has the responsibility of rebelling and establishing its own identity. Could rap fans be searching for a new infusion into the music genre they love?

It has also come out that Kanye West is a born-again Christian. Even Chance The Rapper, who often uses profanity in his rap music, went on a sabbatical to “learn the Word of God.”

Nothing is certain, but every new trend has a beginning. The British Invasion started a music trend in the 60s, and the next big departure in music came in the 90s with the grunge movement. It will be interesting to watch and see if the backlash against violent, sexist rap is real or just a fluke.

Fatigue is the enemy of every musical trend; and there is little doubt the repetition of profanity-laced, violent, sexist rap could very well have reaching the point of over saturation – which is the step that leads to fatigue of a trend.